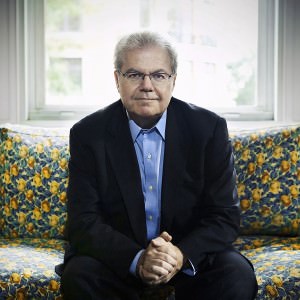 The Horowitz Piano Series at the Yale School of Music presents a recital by the pianist Emanuel Ax on Wednesday, February 6. Ax, “a musician of scope and confidence” (Post-Gazette), will perform a program of music by Beethoven, Schoenberg, and Chopin.

This concert will open Beethoven’s Sonata Op. 2, No. 2 in A major, whose structure – with four movements instead of three – creates a format like that of a symphony through the addition of a minuet or scherzo. Following is a complete antithesis of the symphonic sound with Schoenberg’s Six Little Piano Pieces, Op. 19.

The first half of the concert will close with one of Beethoven’s most famous works Piano Sonata No. 8 in C minor, Op. 13, commonly known as the “Pathétique.”

“Emanuel Ax is one of our most gifted Chopin pianists – a rare breed – and his playing has finesse and suitable power, says Classic CD. He will close the evening with two works by Chopin: the Nocturne in F minor, Op. 55, No. 1, and the Sonata No. 3 in B minor, Op. 58.

This concert takes place at 8 pm in Sprague Hall (470 College St., corner of Wall Street). The Horowitz Piano Series is directed by Boris Berman. Tickets are $20–30, $10–15 with student ID.

For more information or to purchase tickets, visit music.yale.edu or contact the Yale School of Music concert office at 203 432-4158.

Born in Lvov, Poland, Emanuel Ax moved to Winnipeg, Canada, with his family when he was a young boy. He studied at The Juilliard School and Columbia University, capturing public attention in 1974 when he won the first Arthur Rubinstein International Piano competition in Tel Aviv. In 1975 he won the Michaels Award of Young Concert Artists, followed four years later by the coveted Avery Fisher Prize.

Highlights of the current season include return visits to the orchestras of  Cleveland, Chicago, New York, Los Angeles, St. Louis, Pittsburgh, Baltimore, Atlanta, and Toronto. In recognition of the bicentenaries of Chopin and Schumann in 2010 and in partnership with London’s Barbican, Amsterdam’s Concertgebouw, Carnegie Hall, the Los Angeles Philharmonic and the San Francisco Symphony, Mr. Ax commissioned new works from composers Thomas Adés, Peter Lieberson and Stephen Prutsman for three recital programs presented in each of those cities with colleagues Yo-Yo Ma and Dawn Upshaw.

The winner of multiple Grammy Awards, Mr. Ax has been an exclusive Sony Classical recording artist since 1987. Mr. Ax is a Fellow of the American Academy of Arts and Sciences and holds honorary doctorates of music from Yale and Columbia Universities.