“Ezra Laderman has been a major behind-the-scenes force in American music for many decades.”
–New Music Box 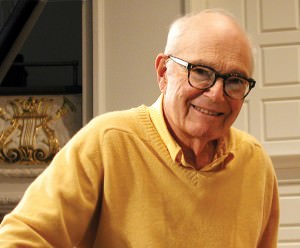 The centerpiece of the concert is the world premiere of a new piece for solo bassoon by Laderman, performed by bassoonist (and YSM faculty member) Frank Morelli. “Morelli's playing is a joy to behold,” says Gramophone, and the Miami Herald has praised his "breathtaking virtuosity."

Preceding the Laderman work will be five new pieces by graduate composers: “Thrice” by James Rubino; “The Three Truths” by Matthew Welch; “Poems of the Night” by Balint Karosi; “Lamentation” byPolina Nazaykinskaya; and “Cliff Notes” by Stephen Feigenbaum.

The concert begins at 8 pm in Morse Recital Hall in Sprague Hall (470 College Street, New Haven). Admission is free, and no tickets are required. For more information, call the Yale School of Music concert office at 203 432-4158 or visit music.yale.edu.

Ezra Laderman is a distinguished and widely performed composer. His twelve string quartets, eleven concertos, and eight symphonies are notable contributions to the repertory, and his commissions have included works for the New York Philharmonic, Chicago Symphony, Los Angeles Philharmonic, Philadelphia Orchestra, Pittsburgh Symphony; and for the orchestras of Minnesota, Dallas, Louisville, Houston, Detroit, Albany, Denver, New Jersey, Indianapolis, Syracuse, and New Haven. He has written music for two Academy Award-winning films, six dramatic oratorios, music for dance, and seven operas, including Marilyn, based on the life of Marilyn Monroe, which premiered at New York City Opera in 1993. Laderman was Dean of the Yale School of Music from 1989 to 1995 and is currently Professor of Music. He has been chairman of the NEA’s composer-librettist program, president of the American Music Center, director of the music program of the NEA, president of the National Music Council, chairman of the board of the American Composers Orchestra, and president of the American Academy of Arts and Letters. He has taught at Sarah Lawrence College and at SUNY Binghamton. He has received three Guggenheim fellowships and the Rome Prize, and has had residencies at the Bennington Composers Conference, the American Academy in Rome, and at the Rockefeller Foundation at Bellagio.