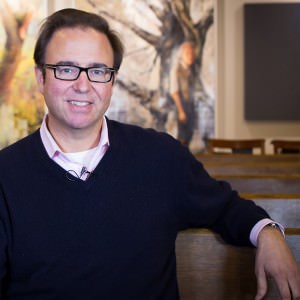 The concert will include all of Theofanidis's music for string quartet, including Visions and Miracles and Ariel Ascending, and two quintets for piano and strings: Allegory of the Cave and the new piece At the Still Point. Also on the program is Summer Verses for violin and cello. Of the subject of Summer Verses, Theofanidis said, “The summer is filled with light and energy, though in my case this year, there are some more weighty things which are important and pressing; both of these strains make their way into my piece.”

At the Still Point is being premiered in conjunction with Q U 4 R T E T S, an artistic collaboration between visual artists Bruce Herman and Makoto Fujimura, theologian Jeremy Begbie, and composer Theofanidis inspired by T.S. Eliot’s Four Quartets. At the Still Point is a piano quintet written as a part of the musical score accompanying Q U 4 R T E T S. The associated four paintings are on display February 21 – March 8 at the Gallery of Sacred Arts at the Yale Institute of Sacred Music.

The New York Times has called Theofanidis’s work “…lyrical, exotic soul-searching.” A member of the Yale School of Music faculty, Theofanidis is the winner of numerous awards and fellowships, including a Grammy nomination for his work The Here and Now based on the poetry of Rumi.

Donald Berman is an American pianist renowned for his definitive interpretations of new American music, and has established an extensive discography in the works of such composers as Ives, Ruggles, Kernis, and many others. The Henschel Quartet Munich is one of today’s leading international string quartets, garnering acclaim throughout their career.

Christopher Theofanidis (b. 1967) regularly writes for a variety of musical genres, from orchestral and chamber music to opera and ballet.  His work, Rainbow Body, which is loosely based on a melodic fragment of Hildegard of Bingen, has been programmed by over 120 orchestras internationally.   Mr. Theofanidis’ works have been performed by such groups as the New York Philharmonic, the London Symphony, the Philadelphia Orchestra, and the Orpheus Chamber Orchestra, and he has a long-standing relationship with the Atlanta Symphony and Maestro Robert Spano.  His Symphony #1 has just been released by that orchestra on disc.

Mr. Theofanidis has written widely for the stage, from a work for the American Ballet Theatre, to multiple dramatic pieces, including The Refuge for the Houston Grand Opera and Heart of a Soldier with Donna DiNovelli for the San Francisco Opera.  His large-scale piece, The Here and Now, for soloists, chorus, and orchestra, based on poetry of Rumi, was nominated for a Grammy award in 2007.

Mr. Theofanidis is currently on the faculty of Yale University and has taught at the Peabody Conservatory and the Juilliard School.  He is also a fellow of the US-Japan’s Leadership Program.  Mr. Theofanidis’ upcoming works include the opera, Siddhartha, for the Houston Grand Opera, a new work for the Miro String Quartet for Chamber Music Monterey Bay in collaboration with the multi-media artist, Bill Viola, a solo piano work for the fiftieth anniversary of the Van Cliburn Competition, and a evening-length oratorio, called Creation/Creator for the Atlanta Symphony and Chorus. Website:  www.theofanidismusic.com

The Henschel Quartet, comprises the Henschel siblings, violinists Christoph and Markus, and violist Monika, as well as cellist Mathias Beyer-Karlshøj. They have been coached by such legendary musicians at Louis Krasner and Eugene Lehner, who had themselves worked with composers such as Béla Bartók and Arnold Schönberg, giving the quartet unique insights into the works of the Second Viennese School. In 1995, the quartet won no less than five prizes at the International String Quartet competitions in Evian, Banff, and Salzburg, and in 1996 went on to receive the first prize and gold metal at the coveted Osaka International String Competition. In March 2010, they had the great honor of performing for Pope Benedict XVI in the Vatican, and have performed as Cultural Ambassadors for Germany at Brussels Bozar and the re-opening of the UNESCO World Heritage Site of the Anna-Amalia Library. In March 2012, the quartet returned for the fourth time to the Royal Spanish Palace Palacio Real, where they performed on four Royal Stradivarius instruments. Each summer, the Henschel Quartet holds its own festival at the old monastery of Seligenstadt in Germany, which Frankfurter Allgemeine Zeitung called “Germany’s nicest open air venue.”

Pianist Donald Bermand has performed to critical acclaim at major venues in the U.S., Europe, and the Middle East. He devoted ten years of his energies to curating an exhaustive collection of neglected works by American composers, an effort sponsored by the American Academy in Rome, which resulted in a 4-concert series at Carnegie Hall and a newly-released CD set on Bridge Records. He has premiered such diverse works at Su Lian Tan’s U-Don Rock, Donald Martino’s Piano Trio, and David Lang’s Burn Notice. Other recent performances include Mozart concertos with the Columbus Symphony and recitals linking Haydn and Schubert to newer compositions, performances the New York Times called “thrillingly clear.” Berman directs the Contemporary Music Ensemble at Tufts University, the Summer Piano Institute at the New England Conservatory, and was a Radcliffe Institute Fellow at Harvard University in 2011.