“One of the world’s top baroque orchestras.”
– Gramophone 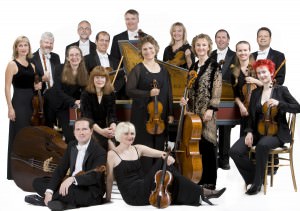 The Yale School of Music presents Tafelmusik in the multimedia program House of Dreams on Tuesday, March 5 at 8 pm, in Morse Recital Hall.

House of Dreams is a groundbreaking and world-renowned venture into the collaboration between visual and musical arts in the time of Purcell, Handel, Vivaldi, and Bach. Planned as an international project involving the Handel House Museum (London), the Palazzo Smith Mangilli-Valmarana (Venice), the Golden ABC (Delft), the Palais-Royal (Paris), and the Bach Museum and Archive (Leipzig), in conjunction with extensive historical research, House of Dreams is a performance experience that evokes the locations and exact settings, including the visual artistic masterpieces, that inspired some of the greatest baroque composers of the age.

Tafelmusik has been hailed as "one of the world's top baroque orchestras" by Gramophone Magazine. In recent seasons, the orchestra made its debut at Carnegie Hall to sold-out performances that The New York Times praised for “stately, buoyant, and crisply etched playing… elegant phrasing and lithe clarity.” The Toronto-based period instrument orchestra has toured worldwide, and is the only Canadian orchestra to have held an annual international residency at the Klang und Raum Festival (Germany).

This concert is presented jointly by the Oneppo Chamber Music Series, directed by David Shifrin, and the Yale Collection of Musical Instruments, directed by William Purvis. Morse Recital Hall is located in Sprague Hall at 470 College Street (corner of Wall Street), New Haven.

Tafelmusik Baroque Orchestra, a group of seventeen permanent members founded in 1979 by Kenneth Solway and Susan Graves, has been under the inspired leadership of Music Direct Jeanne Lamon since 1981. Since its formation, Tafelmusik has been at the vanguard of artistic innovation and the creation of new contexts for the performance of baroque and classical music. The orchestra has performed in the word’s leading concert halls, including the Concertegebouw (Amsterdam), the Musikverein (Vienna), Symphony Hall (Birmingham) and the Barbican Centre (London). Their extensive discography entails over 76 baroque and classical albums on the Sony Classical label; in 2012, the group established its own record label, Tafelmusik Media, which recently released a DVD of the acclaimed concert, The Galileo Project. Tafelmusik is dedicated to establishing Toronto as a North American center for baroque and classical music, performing over 50 concerts each season at Trinity-St. Paul’s Centre in addition to performance series at the Toronto Center for the Arts, Koerner Hall, the Royal Conservatory of Music, and Opera Atelier. The Tafelmusik Chamber Choir, formed in 1981 to complement the orchestra, has been lauded by The Globe and Mail as “the best period-performance choir anywhere in the world.”