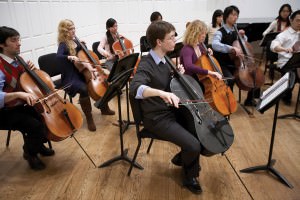 The Yale School of Music celebrates the 30th anniversary of Yale Cellos in a concert on Wednesday, April 10. Founding director Aldo Parisot will lead the Grammy-nominated ensemble in music from the baroque to the present day, including pieces by Vivaldi, Ravel, Tchaikovsky, Mussorgsky, Veracini, and others.

Four virtuoso soloists will open the program, beginning with special guest Patrick Jee, a YSM graduate who is now a member of the New York Philharmonic. Jee will perform the Fantasy by faculty composer Ezra Laderman, a piece that he has recorded for Albany Records. The other soloists are Jennifer Jinhee Park, Jurrian van der Zanden, and finally James Jeonghwan Kim, whose New York debut recital this February the New York Concert Review hailed as “absolute perfection.”

The first half of the concert will conclude with Vivaldi’s Concerto in D minor, Op. 3 No. 11, originally for two violins and cello and arranged for four cellos by Laszlo Varga. The soloists are Ole Akahoshi (the principal cellist of the ensemble and a member of the YSM faculty), Arnold Choi, Joonwhan Kim, and James Kim.

The second half of the concert will feature the full Yale Cellos ensemble, beginning with Bejun Mehta’s arrangement of Veracini’s Largo. There will be three of Claude Kenneson's  arrangements for cello ensemble: Corelli’s “Christmas Concerto” (Concerto Grosso, Op. 6, No. 8), three selections from Mussorgsky’s Pictures at an Exhibition, and Ravel’s Adagio Assai (from the Piano Concerto in G major).

J.S. Bach’s Prelude No. 22 in B-flat minor, arranged by Parisot’s Brazilian compatriot Heitor Villa-Lobos, is a tour de force for cello orchestra. The concert will conclude with Orawa by esteemed contemporary Polish composer Wojciech Kilar, a piece specially transcribed for Aldo Parisot and the Yale Cellos by Alexander Mandl.

Aldo Parisot is also a painter, and images of his paintings will be projected before and after the concert and during intermission.

The concert takes place in Morse Recital Hall, located in Sprague Hall at 470 College Street, New Haven. Tickets to this concert are $10–$20, $5 for students. For more information or to purchase tickets, visit music.yale.edu or call the Yale School of Music concert office at 203 432-4158.

“As a teacher, he is an object of pilgrimage.” — New York Magazine 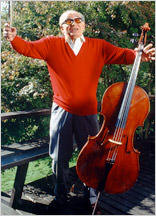 Aldo Parisot’s career as a performer, teacher, and advocate for his instrument are extraordinary. In the seven decades of his career, he has appeared with many of the world’s major orchestras with such conductors as Stokowski, Barbirolli, Bernstein, Mehta, Monteux, Sawallisch, Hindemith, and Villa-Lobos. He has premiered works written especially for him by Quincy Porter, Joan Panetti, Yehudi Wyner, and Heitor Villa-Lobos, among many others. He premiered the Cello Concerto No. 2 by Villa-Lobos in his New York Philharmonic debut, and created a sensation at the 1964 Tanglewood Festival with his premiere of Donald Martino’s Parisonatina al’Dodecafonia. Born in Brazil, Mr. Parisot came to the United States in 1946 and made his debut with the Boston Symphony Orchestra at Tanglewood. He was a member of the Yale String Quartet and the creator of the internationally renowned Yale Cellos. Mr. Parisot has served on the faculties of Juilliard, Peabody, Mannes, and the New England Conservatory of Music. He joined the Yale faculty in 1958.

Formed in 1983 by Aldo Parisot, the Yale Cellos have earned an international reputation for successful recordings, richness of sound, virtuosity, and their many additions to the cello ensemble literature. In addition to annual concerts at Yale University, the ensemble has performed in Zankel Hall and Weill Recital Hall at Carnegie Hall, and at cello festivals in France and England. In May of 2005, Mr. Parisot and the Yale Cellos toured Korea to great acclaim. The Yale Cellos under Mr. Parisot may be heard on the recording Cellists from Yale, issued in Brazil by Phonodisc, and The Yale Cellos Play Favorites, on Delos. Their disc Bach/Bachianas, also on Delos, received a Grammy nomination in 1988. The ensemble has recorded a CD for Albany Records of the music of Ezra Laderman, Three Works Written for Aldo Parisot. Their CD L’art du violoncelle was released by Calliope Records. Their most recent CD is Cello, Celli (Naxos, 2006), featuring works by Bach and Brubeck.

Cellist Patrick Jee has earned international acclaim for his bold musicality, rich sound, and passionate performances. Mr. Jee has made appearances at Carnegie Hall, Alice Tully Hall, Kennedy Center, and Wigmore Hall among many other major venues. He has performed at international music festivals and has given extensive tours of the United States, Europe, and Asia. He is the winner of several prestigious competitions, and has appeared as soloist with orchestras including the Buffalo Philharmonic, Rochester Philharmonic, Moscow Chamber Orchestra, National Orchestra of Toulouse, to name a few. Mr. Jee is also a member of the New Piano Trio, a prize winner at the 2008 Fischoff, 2007 Coleman and the 2007 Plowman Chamber Music Competitions. This year, Patrick Jee was chosen by Alan Gilbert to join the New York Philharmonic. Mr. Jee earned the Bachelor of Music degree from the Juilliard School and a Master of Music degree from Yale University, where he studied with Aldo Parisot. For more information please visit www.PatrickJee.com.