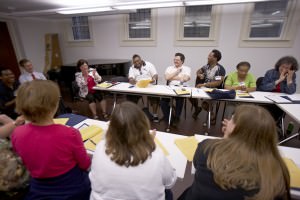 The fourth Symposium on Music in Schools will take place at the Yale School of Music June 6–9, 2013. Supported by the Yale College Class of 1957, the Symposium is a core program of the Music in Schools Initiative honoring outstanding public school music teachers from around the United States. This biennial conference allows Music in Schools to extend its reach beyond the intensive ongoing programs with the New Haven Public Schools, onto a national level.

From a pool of nearly 300 nominees representing 45 states, a panel of music professionals from YSM and NHPS selected this year’s 50 Distinguished Music Educators. The selected educators hail from 32 different states, including the first ever Symposium attendees from Kansas and Mississippi. These music teachers will travel to New Haven, all expenses paid, from across the country to attend the four-day symposium.

Workshops and discussions at this year’s symposium will focus around one main theme: The Role of Music in School Reform. The issue of school reform is a hot topic throughout the nation. Between recent programs like the Race to the Top Fund and the Common Core State Standards, districts are in ongoing discussions about what exactly our young students should be learning. Often in recent years, music teachers have been compelled to fight to keep their programs off the chopping block. This year’s Symposium aims to bring attention to the very integral role music can play in school reform.

The four-day event will open with a workshop with Richard Deasy, former director of the Arts Education Partnership, on the history of music’s role in school reform. A panel including Scott Shuler, immediate past president of the National Association for Music Education (NAfME), will then deliberate current issues in school reform. David Myers, current director of the University of Minnesota School of Music, and Dantes Rameau ’07MM, co-founder of the Atlanta Music Project, will appear to discuss partnership programs between public schools and music organizations. The 50 teachers will be honored at an awards banquet at the conclusion of the weekend.