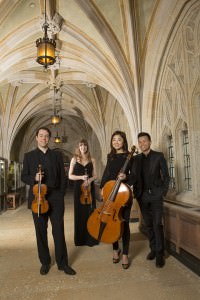 The Yale School of Music presents a recital by Edson Scheid, baroque violin, and Soo Jin Chung, baroque cello, on Wednesday, March 27 at 5:30 pm. The concert will include music from the Baroque and Classical periods, with selections by J.S. Bach, Arcangelo Corelli, Joseph Haydn, and others.

The program includes Corelli's Sonta for violin and cello, Op. 5, No. 3; Bach's Sonata in E minor for violin, cello, and harpsichord, BWV 1023; and Haydn's Trio in A major H.XV:18.

Scheid and Chung are both alumni of the Yale School of Music who are members of the postgraduate Yale Baroque Ensemble. They will be joined by fellow YBE member David Fung, harpsichord and fortepiano. The YBE is the ensemble-in-residence at the Yale Collection of Musical Instruments, where the recital will take place.

Admission to the performance is free. The Yale Collection of Musical Instruments is located at 15 Hillhouse Avenue, New Haven. For more information, visit music.yale.edu or contact the Yale School of Music concert office at 203 432-4158.

The Yale Baroque Ensemble, directed by baroque violinist Robert Mealy, is a postgraduate ensemble at the Yale School of Music dedicated to the highest level of study and performance of the Baroque repertoire. Using the Yale Collection of Musical Instruments’ set of new baroque instruments, members of the Ensemble go through an intensive one-year program of study, immersing themselves in the chamber and solo repertoire from 1600 to 1785 to create idiomatic and virtuosic performances of this music. The Yale Baroque Ensemble plays on the YCMI’s collection of new baroque string instruments made by Jason Viseltear of New York City, after del Gesù, Amati, and Testore. Bows are also from the YCMI collection, made by David Hawthorne and Christopher English after seventeenth-century and eighteenth-century originals.