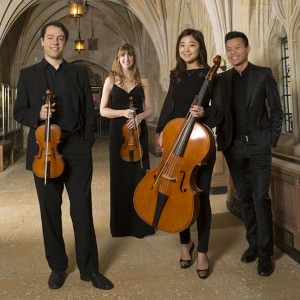 The Yale School of Music will present the Yale Baroque Ensemble on Thursday, April 4, 2013. Directed by faculty member Robert Mealy, the ensemble will perform the works of European musical pioneers Dussek, Haydn, and Mozart.

Robert Mealy, described by the New Yorker as “a world-class early music violinist,” directs the YBE. The performance will also feature solo violin selections from the Caprices of Pagnini and Locatelli.

The concert will open with Jan Ladislav Dussek’s Piano Quartet in E-flat major, Op. 56, C. 197. Next is Franz Josef Haydn’s Piano Trio in G major, “The Gypsy,” Hob. XV/25. After intermission the program will resume with Scheid performing Caprices by Niccolo Paganini and Pietro Locatelli. The concert will conclude with W.A. Mozart’s Piano Quartet in E-flat major, K. 493.

The concert begins at 5:30 pm at the Yale Collection of Musical Instruments, where the YBE is the ensemble-in-residence. The event is free and open to the public; no tickets are required. The Collection is located at 15 Hillhouse Avenue, New Haven.For more information, call the Yale School of Music concert office at 203 432-4158 or visit music.yale.edu.

About the Yale Baroque Ensemble

The Yale Baroque Ensemble, directed by Robert Mealy, is a postgraduate ensemble dedicated to the highest level of study and performance of the Baroque repertoire. String players in the Ensemble go through an intensive one-year program of study, immersing themselves in the chamber and solo repertoire from 1600 to 1785. The program is designed for modern players to develop virtuosity and fluency in various historical styles, and to allow the participants to find their own eloquent voice on baroque instruments. Through coachings and individual lessons, the participants learn to read early notation, develop a familiarity with primary source material and treatises, and become fluent with improvisation in various styles.