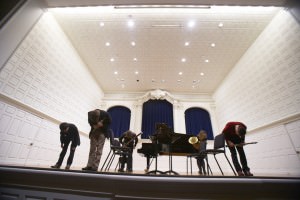 The Yale School of Music presents the winners of the annual Chamber Music Competition in a showcase concert on Tuesday, May 7 at 8 pm in Morse Recital Hall. The concert is the last event of the 2012–2013 Oneppo Chamber Music Series.

In announcing the competition winners, Wendy Sharp, the director of chamber music at YSM, noted: "We were impressed with the high level of seriousness, preparation and musicianship. It was not easy choosing a program from such a strong list of groups. When picking the program, we considered not only the performances, but also what might make an interesting concert, the variety of work and instrumentation, and overall length."

Franz Schubert’s Fantasy in C major, D. 934 will be performed by pianist Henry Kramer and violinist Cordelia Paw. Musicologist Christopher Gibbs praised the work as “among not only [Schubert’s] greatest but his most original” compositions.

The performance will conclude with Béla Bartók’s Sonata for Two Pianos and Percussion, featuring pianists Peter Klimo and Melody Quah and percussionists Cristobal Gajardo and Jonny Allen. Ever since its debut in 1938, the sonata has received enthusiastic reviews and has become one of Bartók’s most performed works.

This concert is part of the Oneppo Chamber Music Series, directed by David Shifrin, at the Yale School of Music. Wendy Sharp is the director of the chamber music program at the School. Morse Recital Hall is located in Sprague Hall at 470 College Street (corner of Wall Street), New Haven.