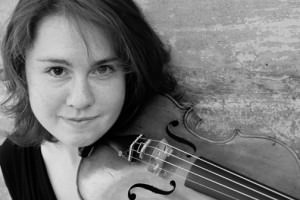 Caroline Shaw ’07 MM has been named the winner of the 2013 Pulitzer Prize in Music. She  receives the prestigious award for her "Partita for 8 Voices," written for the vocal ensemble Roomful of Teeth and released on New Amsterdam Records.

The Pulitzer Prize in Music is for a "distinguished musical composition by an American that has had its first performance or recording in the United States during the year."

YSM faculty member Aaron Jay Kernis ’83MM was also a finalist for the award for his "Pieces of Winter Sky," which premiered last November 15 at Lincoln Theater, University of Hartford. The citation calls "Pieces of Winter Sky" a "luminous work that takes listeners into a mystical realm marked by taut expressive control and extraordinarily subtle changes of tone, texture and nuance. The third finalist was Wadada Leo Smith for "Ten Freedom Summers," hailed as "an expansive jazz work that memorializes 10 key moments in the history of civil rights in America, fusing composed and improvised passages into powerful, eloquent music."

Caroline Adelaide Shaw is a New York-based musician, appearing in many guises. She performs primarily as a violinist with the American Contemporary Music Ensemble (ACME) and as a vocalist with Roomful of Teeth. She also works with the Trinity Wall Street Choir, Alarm Will Sound, Wordless Music, Signal, The Yehudim, Victoire, the Mark Morris Dance Group Ensemble, and Opera Cabal. Caroline's music has been performed by So Percussion, ACME, the Brentano Quartet, and Roomful of Teeth, and her collaboration with artist Jane Philbrick is part of a permanent landscape installation at Mass MoCA. Caroline has been a Yale Baroque Ensemble fellow and a Rice University Goliard fellow. She was a recipient of the infamous Thomas J. Watson fellowship, to study historical formal gardens and landscape architecture in Europe.