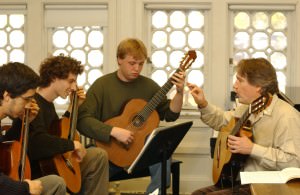 On Wednesday, May 8, 2013 at 8 pm, the students of guitarist Benjamin Verdery will perform a concert of Guitar Chamber Music. The event will include classic and contemporary  works, including the Yale premiere of a piece by Verdery  himself. Other composers featured on the program include Leo Brouwer, Napoléon Coste, Jindřich Feld, and Manuel De Falla.

Brouwer's Per Suonare a Due for two guitars will be performed by Marco Sartor and Alexander Malovanov. The piece, composed of five short movements, dramatically explores the reaches of the human imagination. Oboist Jeff Reinhart and guitarist Ray Zhou will perform Napoléon Coste's romantic pastoral work, Le montagnard, Op. 34.

Koh Kasama, guitar, and Kenny Seung, flute, will give the Yale premiere of Jindřich Feld's Divertimento. Feld was a Czech composer who produced over 200 widely varied compositions.

Katrin Endrikat, guitar, and Michael Zuber, bassoon, will perform selections from De Falla's Seven Popular Spanish Songs. De Falla is one of Spain's most important musicians of the 20th century, and this piece, a musical travelogue, features authentic folk songs from different regions of Spain.

The performance will conclude with the Yale premiere of Verdery's What He Said performed by guitarists Arash Noori and Hermelindo Ruiz. The piece, co-commissioned by the 92nd Street Y, was premiered on November 18, 2010 by Sergio and Odair Assad.

The concert will take place at Morse Recital Hall (corner of Wall Street). Admission is free. For more information, visit music.yale.edu or call the Yale School of Music concert office at 203 432-4158.

Benjamin Verdery, chair of guitar at the Yale School of Music since 1985 and considered “an American original, an American master” by Guitar Review Magazine, has enjoyed an innovative and eclectic musical career. Since his 1980 New York debut with his wife, flutist Rie Schmidt, Benjamin has performed throughout Europe, Asia, and North America and has recorded and performed with such diverse artists as Leo Kottke, Hermann Prey, and John Williams. Benjamin has released over 15 albums, featuring arrangements of works by Bach, Mozart, Strauss, and Hendrix, and the traditional Amazing Grace. A prolific composer, Benjamin Verdery has had many compositions performed and published over the years, most recently Now and Ever for David Russell and Peace, Love and Guitars for John Williams and John Etheridge. Mr. Verdery is the artistic director of the Yale Guitar Extravaganza and Art of the Guitar at the 92nd St Y (New York), conducts an annual master class week on the Island of Maui (Hawaii), and is an honorary board member of the Suzuki Association of the Americas, Inc.