A Conjoining of Ancient Song, a new documentary by Dr. Gretchen Berland and Yale School of Music professor Willie Ruff, will receive its world premiere. The half-hour Yale documentary retraces the trajectory of a rapidly eroding form of congregational singing out of Scotland and into both African American and Native American religious song traditions.

After the screening, there will be a discussion featuring Ruff, Berland, and Yale sociologist Kai Erikson. The screening and discussion will take place Monday, April 22 at 7 pm in Battell Chapel.

Mr. Ruff's project on congregational line singing began in 2005 at a Yale conference comparing traditions in Alabama, Kentucky, and the Gaelic-speaking Free Church Presbyterians of the Scottish Highlands. This first foray resulted in three television documentaries, a feature story for NPR's "Morning Edition," and a 2007 conference in Muscogee Creek Nation, Oklahoma.

The premiere screening at Yale, sponsored by the Yale Institute of Sacred Music, is free and open to the public; no tickets are required. For more information, click here or call 203.432.5062. 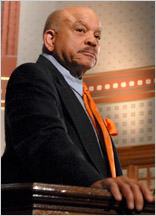 Mr. Ruff, a French horn and bass player, has a wide-ranging and honored career in the music world. After graduating from Yale, he formed the Mitchell-Ruff Duo with pianist Dwike Mitchell. The pair performed with jazz icons such as Dizzy Gillespie, Louis Armstrong, Duke Ellington, and Count Basie. In 1959, they introduced jazz to the Soviet Union (three years before the officially sanctioned introduction of jazz there), and in 1981 they did the same in China.

Since 1971, Professor Ruff has been on the faculty of the Yale School of Music, as well as holding teaching positions at other venerated universities such as Dartmouth and Duke. He is the founding director of the Duke Ellington Fellowship program at Yale, and his outreach work bringing jazz artists to New Haven earned him the Governor's Arts Award in 2000. His all-encompassing musical expertise includes arranging, ethnomusicology, and folklore; he has been a pioneer in the field, and organized an international conference on the Neurophysiology of Rhythmic Perception.