Choral conducting student accepted to program in Germany for 2013–2014 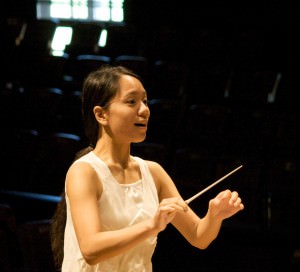 Yale School of Music student Adrianna Tam ’13MM has been selected to participate in the Congress-Bundestag Youth Exchange for Young Professionals (CBYX), a year-long, federally-funded fellowship for study and work in Germany. Ms. Tam, along with Yale alumna Lauren Motzkin ’12BA, was one of 75 participants selected (from over 600 applicants) for this unique fellowship program.

Since 1984, over 1,650 Americans have been awarded this opportunity to gain cultural, theoretical, and practical work experience in Germany. 2013–2014 marks the thirtieth year of the CBYX program.

A native of Texas, Adrianna Tam graduated Phi Beta Kappa from the Massachusetts Institute of Technology with a Bachelor of Science degree in music. At MIT, she was an Emerson Fellow, Burchard Scholar, Arts Scholar, and the 2011 recipient of the Louis Sudler Prize in the Arts. This past summer she was selected to be a conducting fellow at the Norfolk Chamber Music Festival, where she studied with Simon Carrington.  She is currently concluding a Master of Music degree in choral conducting at Yale, where she sings with Yale Schola Cantorum, the Yale Camerata, and Pro Musica, and serves as an alto section leader for the Battell Chapel Choir.

While in Germany on CBYX, participants will attend a two-month intensive German language course, study at a German university or professional school for four months, and complete a five-month internship with a German company in their career fields. Participants are placed throughout Germany, and have the opportunity to learn about everyday German life from a variety of perspectives.

Conceived and supported by members of the United States Congress and the German Bundestag (Parliament, the CBYX program is financially supported by the Bureau of Educational and Cultural Affairs of the U.S. Department of State under the authority of the Fulbright-Hays Act. Participants come from nearly every career field, and from all over the United States.