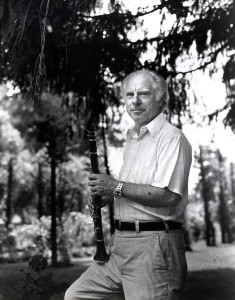 Keith Wilson, Professor Emeritus of Clarinet, died peacefully on Sunday, June 2. He was 96.

"The profound influence Keith had on the lives of countless students, colleagues, and friends is incalculable, for he made each of us feel special in his presence," said Robert Blocker, Dean of the School of Music. "His humanity and humility elevated music and its servants. We were enriched by Keith's extraordinary life."

Keith Wilson was appointed to the YSM faculty in 1946 and taught here for over 40 years before retiring in 1987 at the age of 70. When he joined the faculty, he was the School's only woodwind professor. He served as director of the Yale Bands until 1972. During his tenure, he also served as the associate dean of the School of Music and director of the Norfolk Summer School of Music.

In 1999 he was awarded the Sanford Medal, the School of Music's highest honor, in a ceremony during a Yale Concert Band performance. He also received the Gustav Stoeckel Award, which honors faculty who have contributed to the life of the School of Music. Dean Blocker called Wilson "the embodiment of all the Yale School of Music stands for and hopes to be."

Wilson's former students include clarinetist Richard Stoltzman '67MM and composer Mitch Leigh '52MM. An article in the Yale Bulletin and Calendar quotes Stoltzman as saying, "It was through Mr. Wilson that I discovered the greatest mission of a musician: to communicate music with peers to the audience. He gave me that wisdom and that love." Stoltzman also recalled Wilson's artistry, saying that when he first heard Wilson perform the Brahms Clarinet Quintet, "I heard the clarinet as I had never heard it before, but as I always dreamed it could be — not just as an instrument but as an expression of the deepest emotions of the music."

Clarinetist David Shifrin, who succeeded Wilson on the faculty, called him "one of the great single most important figures in the history of the Yale School of Music."