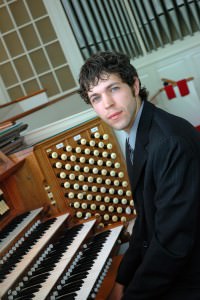 Adam Pajan '10MM took second place in the Longwood Gardens Organ Competition, one of the largest international organ competitions in the world, on June 22.

The competition challenges students to acclimate themselves to the highly specific aspects of a 10,010-pipe Aeolian organ. Each competitor receives photos and a tour of the organ, then is given a limited amount of time to prepare for preliminaries and the final round. Pajan’s performance earned him the $15,000 Firmin Swinnen Prize.

Pajan, 26, is currently a DMA student in organ with an emphasis on church music at the University of Oklahoma’s American Organ Institute, where he studies with John Schwant. In 2011, Pajan was awarded first prize at the Arthur Poister Organ Scholarship Competition and in 2009 won the Albert Schweitzer Organ Competition USA. He was a semifinalist in the American Guild of Organists’ National Young Artists Competition in Organ Performance in May 2012. He holds a Master of Music degree from the Yale University School of Music and Institute of Sacred Music, where he studied with Martin Jean and coached with Thomas Murray, and a Bachelor of Music degree from Furman University as a student of Charles Tompkins.

The inaugural Longwood Gardens International Organ Competition drew musicians from around the world to compete for the largest cash awards for an organ competition anywhere, including the Pierre S. du Pont First Prize ($40,000); the Firmin Swinnen Second Prize ($15,000); and the Clarence Snyder Third Prize ($5,000). Judges evaluated 100 competitors' audition recordings and selected 10 of the organ world's brightest rising stars to compete live before a panel of noted judges.