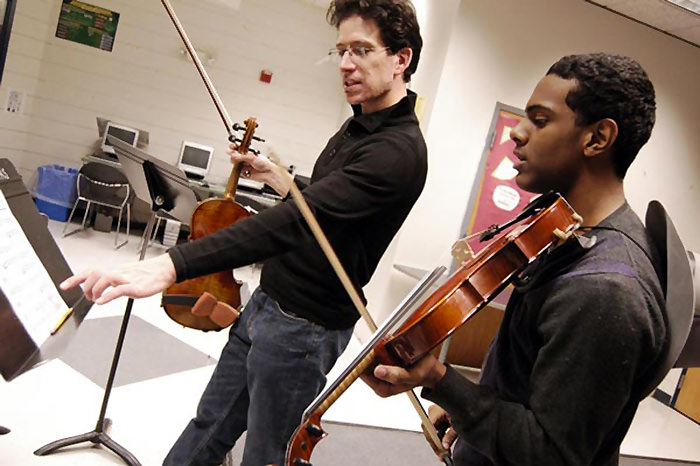 Music educator Sebastian Ruth will join the Yale School of Music faculty as Visiting Lecturer for the 2013–14 academic year. He will teach a course called Music and Service and will work with teaching artists in YSM's Music in Schools Initiative.

Ruth is the founder and artistic director of Community MusicWorks, a nationally-recognized organization that connects professional musicians with urban youth and families in Providence, Rhode Island. A violinist, he is also a member of the Providence String Quartet, the organization’s resident ensemble.

Dean Robert Blocker commented, "An eminent cultural leader, Sebastian Ruth is a gifted musician who devotes his talent and intellect to the advancement of music in a very successful community program, Community MusicWorks. He brings to us and our Music in Schools Initiative a vibrant, innovative and entrepreneurial knowledge for musical collaborations that are artistically compelling and personally fulfilling. These values and characteristics earned him a MacArthur Award, and we are fortunate to have him join us at Yale this coming year."

Ruth said, "I am delighted to be working with the Yale School of Music in the coming year to design a new course exploring the connections between music and public service. My career over the past 16 years has been focused on building Community MusicWorks in Providence, Rhode Island, and in many ways this has been an ongoing experiment. The experiment has been to discover how my colleagues and I could engage a local community as professional musicians and explore how music can become a powerful catalyst for social change. I look forward to the course at Yale, and the set of questions we will explore—about musicianship, about the changing roles for musicians in contemporary society, about the problems of American cities, and how musicians conceive of their importance to society."

As a member of the Providence String Quartet Sebastian Ruth has performed in recent seasons in Providence, Boston, Los Angeles, Banff, and New York, and with members of the Borromeo, Muir, Miro, Orion, and Turtle Island String Quartets, with pianist Jonathan Biss, and violist Kim Kashkashian. Sebastian graduated from Brown University in 1997, where he worked closely with education scholars Theodore Sizer, Mary Ann Clark, and Reginald Archambault on a project exploring the relationship between moral education and music, and with members of the Charleston String Quartet in Brown’s chamber music program. His important teachers have included Lois Finkel, Pamela Gearhart, Eric Rosenblith, Rolfe Sokol, Mela Tenenbaum, and Kim Kashkashian. In 2003, Sebastian studied, under the auspices of a fellowship from The Rhode Island Foundation, in a two-week violin master class with Michele Auclair at the Schola Cantorum in Paris.

Sebastian Ruth serves on the board of the International Musical Arts Institute, and on the advisory boards of the Sphinx Organization and of Music Haven, a non-profit organization in New Haven, Connecticut modeled after Community MusicWorks. In 2012, Sebastian received an honorary doctorate from Brown University, and was named by Strings Magazine as among the 25 most influential people in the string music world.

In 2010, Sebastian visited the White House to receive the National Arts and Humanities Youth Program Award from First Lady Michelle Obama on behalf of Community MusicWorks. That same year, Sebastian learned that he had been selected for the prestigious MacArthur Foundation Fellowship for “creating rewarding musical experiences for often-forgotten populations and forging a new, multifaceted role beyond the concert hall for the twenty-first-century musician.”