A self-described "live-performance junkie," the composer David Lang tested a few different ways of creating an opera that could only be experienced in person.

He attempted to restrict the audience to 10, which didn't work, then banned all audio and video recording, which mostly worked. But it was another idea, a text whispered so quietly that each audience member hears different, fleeting snippets, that characterizes "the whisper opera," a work opening Saturday as part of the Mostly Mozart Festival. 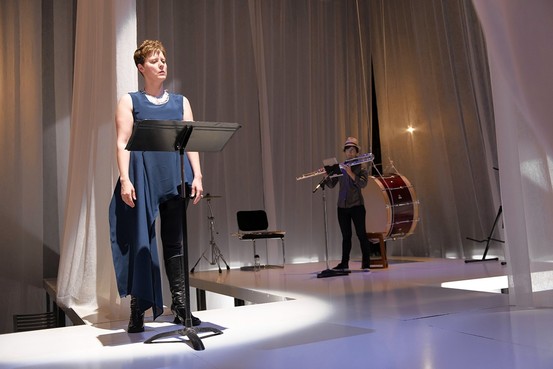 The International Contemporary Ensemble, including the soprano Tony Arnold, performs the one-woman, four-instrumentalist show in its New York premiere. The four-day run is capped at 48 audience members per performance, which will be held at Lincoln Center's Clark Studio Theater.

Mr. Lang created the libretto by typing words into Google, GOOG +1.37% using the search engine's autocomplete function to finish the phrase. The text of each of the four scenes is determined by a different prompt: "when I am alone I always," "they said I was crazy but I," "when I think of you I think of," and "it's not my fault that I am so."

He curated the responses, getting rid of ones that were overtly negative or sexual. The result was a series of phrases that contain the deeply personal things that people share online but would never say out loud.

"People are willing to reveal things about themselves that are so agonized and so vulnerable," Mr. Lang said.

"There are so many private thoughts that are happening, that it amplifies a feeling of aloneness," said Ms. Arnold. She rattled off some of the Google responses to the first prompt: "Think, or think about you, look at myself in the mirror, or find myself singing, or try to not be alone…then you find people who are comfortable being alone, or they turn on the radio, or have guilty pleasures, or eat something they aren't supposed to eat, or end up in a bar."

Mr. Lang, a co-founder of Bang on a Can and a 2008 Pulitzer winner for "the little match girl passion," constructed a series of rules for the performance. Audience members must all be sitting right against the stage. In the score, he wrote that audio, video, amplification and a concert version of the work are strictly prohibited.

On the website of the Museum of Contemporary Art Chicago, where the performance had its premiere, there is a promotional video that shows about 10 seconds of "the whisper opera," filmed during an early rehearsal. Even that was too much. "I tried to get that ICE video taken down," he said. "I don't want people to know about it."

The musicians' parts are difficult, he added, to enhance the live experience. "When you make a piece of music that is really, really hard, the struggle to perform it is a theatrical experience," he said…