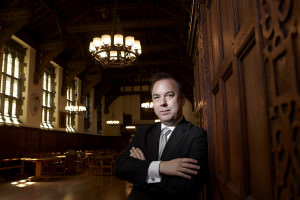 "We played through the score together and we just clicked,” says Laura Hamilton, principal associate concertmaster of New York’s Metropolitan Opera Orchestra. She was talking about a recent powwow with Baroque violinist Robert Mealy as she prepared for the Met’s spring 2013 run of Handel’s Giulio Cesare. It was to be conducted by British early music specialist Harry Bicket, and a colleague had recommended a coaching session with Mealy.

“It was great fun,” Mealy recalls. “Laura was so quick, so responsive, it was a blast.” The expressive physicality of Mealy’s music-making is well-known, and it’s easy to imagine his charismatic communication as the two played through the violin parts to Sextus’s furious aria “Svegliatevi nel core,” Caesar’s seductive “Non è si vago e bello,” Cleopatra’s tragic lament, “Se pietà di me non senti,” and the buoyant, triumphant “Da tempeste.”

In her concertmaster role, Hamilton must rely on unspoken leadership, demonstrating often and interpreting or altering the conductor’s markings as needed. It was the issue of these markings that brought the two violinists together. Having served as concertmaster for The Enchanted Island, a Baroque pastiche, in addition to two seasons of Handel’s Rodelinda and earlier productions of Giulio Cesare, Hamilton is the Met’s go-to 18th-century leader. She’s also led Baroque opera orchestras outside of New York City and is no stranger to Handel’s style, but she particularly wanted guidance interpreting Bicket’s extensively marked instrumental parts. Mealy’s success in exposing modern string players, both student and professional, to period style appealed to her.

One of the world’s greatest orchestras, the Met players are known for versatility, and they rely on the information on the page for help switching from Romantic Russian repertoire to Verdi and from Mozart to French opera, often in the same day. Having played Wagner’s six-hour-long Parsifal the night before, and running off to performances of Verdi’s Don Carlo, Hamilton needed confidence that once Giulio Cesare rehearsals began, she could convey Handel’s style and Bicket’s intentions quickly and efficiently to the entire string section. An experienced concertmaster for conductors from Helmuth Rilling to Masaaki Suzuki, Mealy is used to clarifying the detailed markings of maestros who are also keyboardists. “Basically it’s all about making the musical gesture clearer, more vivid,” he notes, “but if there’s too much information on the page, if the players are just trying to read dots and lines, they’re using their eyes rather than their ears, and they are not inflecting.” Amount of rehearsal time, level of experience, as well as the last orchestra to use the parts also factor in.

In his work with Hamilton, Mealy attempted to impart general principles as well as specific techniques to realize markings for articulation, stress, and dynamics as well as up- and down-bows. Together they paid special attention to Handel’s many passages of rapid sixteenth notes. “It sounds like a sewing machine if these passages end up in the upper half of the bow,” Mealy says, “which is often a modern default position.” Their most significant work was bringing life to Handel’s musical gestures. “In a jumbo-jet sized orchestra,” he smiles, “it’s hard to get information to the last stand anyway, but they are often not prepared for how far they can go with musical gestures.”

Both Mealy and Hamilton remark on how attitudes and instructional language have changed over the years, both for modern players and those involved in historical performance. Mutual respect has grown immensely. “We used to think Baroque players were failed modern players,” Hamilton admits sheepishly, “but in my 27 years at the Met there’s been a lot of turnover. Attitudes have changed, and the period world has gone mainstream.”

“Before, when we heard ‘no vibrato,’ people would roll their eyes,” Hamilton notes. “Now when you say ‘no vibrato,’ you don’t actually get ‘no vibrato,’ you get less vibrato and, more importantly, less continuous vibrato. But there are a few,” she adds with a sigh, “who still play long bows flautando all the time.”

Mealy hopes the old “Baroque means ‘NO!’” attitude will soon be eliminated entirely. “I try to approach this work from a position of permission rather than an attitude of denial. When modern string players are told not to do something, often everything stops. The left hand is their primary expressive device, after all, so if you say ‘don’t vibrate,’ they don’t make any expression at all.” He’s thought hard about this heated issue. “I invite them to think about vibrato not being binary, not ‘on’ or ‘off,’ but that you can have different speeds of vibrato. It’s a technical challenge to start a note without vibrato then add it gradually.” He notes, “they think a lot about vibrato—whether it’s coming from the finger, the wrist, or the arm, but it’s always even. They don’t think about changing the degree.”

Bradley Brookshire, the Met’s continuo harpsichordist for the past four years and an experienced collaborator with both modern and period bands, agrees. “You can’t just say ‘no vibrato’ and call it a day. You have to give them something to do with their right hand that’s interesting and alive, otherwise they feel the tone is too static. They feel cheated and inexpressive.”

Having partnered Simon Rattle and Ensemble ACJW, Michael Christie and the Phoenix Symphony, and many other modern groups, Mealy enjoys coaching crackerjack modern players, and affectionately refers to this work as “Baroque as a Second Language.” Even without having attended conservatory, he understands the mind-set perfectly. “They hate the way they sound in Baroque music but they are terrified of doing something differently.” With so much standard string training focusing on rich, even tone, long bow-strokes, and uniform vibrato, these instrumentalists are often left without usable tools for early music. “They think they will sound bad if you take away their vibrato, and it’s scary. They are being asked to do something they may not be very good at, and that’s alarming for a professional.”

Mealy presents specific positive principles to focus on. “Basically it’s getting them to see gestures instead of long lines. The larger the interval the more articulated; the smaller the interval the smoother, adapting to local rhetorical events as opposed to taking the express train all the way. I tell them to take the local train and look out the window at the details as they go by. If you’ve just played Parsifal, you’re looking at the long line.”