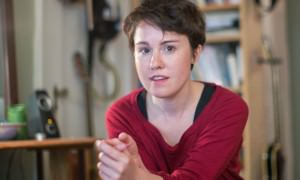 This fall’s New Sounds Live events in October represent the first-ever survey of the music of Pulitzer Prize winner Caroline Shaw, “a musician of many sorts.” Shaw performs as a violinist with the American Contemporary Music Ensemble (ACME) and as a vocalist with Roomful of Teeth. Earlier this year, the composer/vocalist/violist/violinist became, at the age of 30, the youngest-ever recipient of the Pulitzer Prize in Music for her work "Partita for 8 Voices." Hear Shaw's remarkable music in a two-part series, featuring both of the ensembles she plays in and her interactive film/music piece called “Ritornello.”

[…]Caroline Shaw's "Ritornello" is a multimedia installation and live performance piece for voices or for strings. The film was inspired by architecture, the notions of return and memory, and by the tale of Rip Van Winkle just before his waking from an accidental twenty-year slumber in the Catskills. The accompanying music includes elements of American hymnody, Baroque music, and viola looping, with fragments of text, adapted from T.S. Eliot’s Four Quartets and from the original Washington Irving story, “Rip van Winkle” (1819).
READ FULL ARTICLE