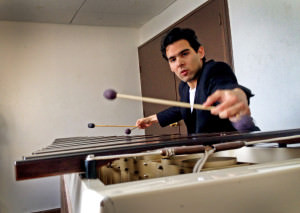 Cristóbal Gajardo '13MM was recently invited to be a guest professor at the University of Chile to give a chamber music workshop.

"The idea of the workshop," he said, "is to teach chamber music to the students: teach them how to give cues and how to follow or lead musically. We also talked about how crucial it is to become a well-rounded musician." Gajardo worked with ten students for two weeks and gave a final concert on September 9. "I am very thankful," Gajardo said, "because I learned all these concepts studying at Yale and working with the Yale Percussion Group. Now I have the opportunity to given them back."

In the first part of the concert, the students performed the pieces that they worked on with Gajardo. The second part featured Gajardo performing solo pieces as well as duets with a flutist.

The concert featured three Chilean premieres: Elliot Cole's Postludes for one vibraphone, four players, and eight bass bows; Peter Klatzow's Ambient Resonances, a duo for vibraphone and marimba that experiements with the resonance of each instrument; and Alejandro Viñao's Khan Variations, which Gajardo called "a pillar" of the solo marimba repertoire.