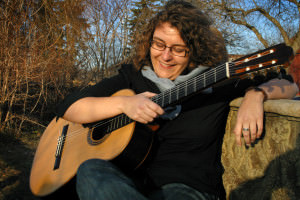 On September 1, 2013, Kim Perlak '01MM began her newly appointed role of Assistant Chair of Guitar at the Berklee College of Music in Boston. With 1100 students and sixty faculty members, the guitar department at Berklee is perhaps the largest and most stylistically diverse in the world. Guitarists such as John Abercrombie, Bruce Cockburn, Al DiMeola, Kevin Eubanks, Bill Frisell, Emily Remler, John Scofield, Steve Vai, and Mark Whitfield are graduates of Berklee's guitar program.

In addition to supervising this department, Perlak will be teaching and working with her colleagues to develop programs.

As a performer, Perlak's versatile and inclusive approach to the instrument embraces new composition, tradition, scholarship, and public service. Her performances have been featured on NPR, the Yale Guitar Extravaganza, the National Guitar Workshop, and CBS Sunday Morning. She is the founder of concert series "Ben & I Play for Peace," which raised $15,000 in 2011 and 2012 for the Wounded Warrior Project and Wheelchairs for Iraqi Kids.