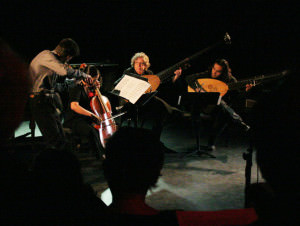 Theorbos, baroque bows, a babbling tenor and a barefoot soprano: Each played a role in the performance of eclectic and under-performed works for larger chamber groups, said Jacob Ashworth MUS ’14, who formed the Cantata Profana last year. Nearly all the musicians in the Cantata are students or faculty from the School of Music and the Institute of Sacred Music, and all have played with one another in the past.

“The group was inspired by the spirit of collaboration, which is essential for chamber music and unique to the Yale environment,” Ashworth said.

Naomi Woo ’12, MUS ’13 said the Cantata presents a repertoire that is not performed enough, whether due to an unusual combination of instruments or the logistical issues associated with larger chamber groups.

Presenting unusual chamber works presents various financial challenges — funding for musicians and staff, instrument rental, costumes and recordings. To propel the success of this year’s season, the Cantata set a goal to raise $14,000 through a Kickstarter campaign in August. The group achieved the goal on Sept. 10 after only 21 days online.

Despite the planning issues that accompany organizing an ensemble of this size and scope, all three musicians interviewed said they were excited about the opportunity to perform these works, which included “Mystery Sonata No. 1” by Heinrich Biber — unusual in its usage of two theorbos, a baroque instrument similar to a large guitar — and “Nouvelles aventures” by Gyorgy Ligeti, which featured a relatively large group of 11 performers in atypical combinations. On the other hand, the final piece, “Seven Romances on Poems by Alexander Blok” by Shostakovich for soprano, violin, cello and piano, was representative of more traditional chamber music.

Ashworth said that while all the musicians are masters in their own right, none is the lead performer.

While Cantata Profana’s inaugural concert last semester centered on the monodrama “Eight Songs for a Mad King,” Ashworth explained that the group has since developed a focus on vocal chamber music and theme-based performance that will be prevalent in the group’s entire season of shows, which will take place in New Haven and New York.

Woo described the Cantata as more of an experience than a concert. “Of Time and Space and Nonsense,” the theme of Monday’s concert and another in Brooklyn Tuesday night, featured changes of lighting, costumes, choreography and acting to challenge the audience to think beyond music as merely sound, and rather to think of its function both in time and space. By presenting information about each work and reflecting on the theme throughout the course of the concert, the Cantata members aimed to make the music accessible to the audience.