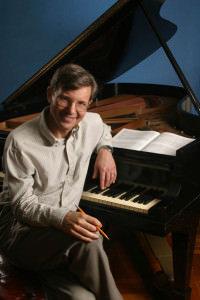 Harold Arlen wrote some of the greatest hits from the 30's and 40's, including the entire score to the classic movie, The Wizard of Oz. Songs such as Over the Rainbow, Get Happy, Stormy Weather, It's Only a Paper Moon, I've Got the World on a String, and Last Night When We Were Young are just some of the standards that live on today and have distinguished Harold Arlen as one of the Great American Composers of the 20th Century.

Rob Kapilow is a graduate of the Yale School of Music and the Eastman School of Music, and is an accomplished pianist. He has brought the joy and wonder of classical music to audiences of all ages and backgrounds, opening their ears to musical experiences and helping them to listen actively. The reach and diversity of his interactive events is considerable, both geographically and culturally: from Native American tribal communities to inner-city high school students and from children barely out of diapers to musicologists long out of Ivy League programs. Mr. Kapilow's popularity and appeal are reflected in notable engagements: on NBC's "Today Show" in conversation with Katie Couric, in a program for broadcast on PBS's "Live From Lincoln Center" in January 2008; and in his books, All You Have To Do Is Listen and What Makes It Great? Kapilow's What Makes It Great? (WMIG) made its debut on NPR's Performance Today nearly 20 years ago, and with its accessible ten-minute format it quickly attracted a wide base of fans and followers.