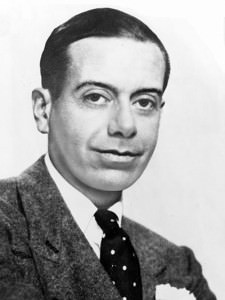 In celebration of the 100th anniversary of Cole Porter's graduation from Yale in 1913, the Music Library presents "From Peru to Paree: A Cole Porter Jubilee," an exhibit on his life and work.

Among Yale's most notable musical alumni, Porter (1891–1964) is recognized as one of the greatest Broadway and Hollywood composers of the golden years. Only two such American icons—Porter and Irving Berlin—wrote their own lyrics. Enduring standards such as "Night and Day," "I Get a Kick Out of You," "Begin the Beguine," and "You're the Top!" have become a part of the American songbook vernacular, performed by jazz musicians and Broadway stars alike.

Drawing on the Gilmore Music Library's extensive Cole Porter Collection, the exhibit presents photographs, letters, scrapbooks, and music manuscripts to illustrate both the work and the life of this remarkable man. A touchscreen computer table offers film clips and recordings of Porter’s stylish and sophisticated songs. The exhibit will be on display in the Memorabilia Room of Sterling Library from October 19, 2013 through January 31, 2014. It is free and open to the public.

On Friday, October 18 at 3 pm, Professor James Hepokoski, will present the opening lecture of the exhibit, "Images of Cole Porter: The Man; The Voice." The lecture will take place in the International Room of Sterling Memorial Library (120  High St., inside High Street entrance). Hepokoski is the Chair of the Department of Music.

The opening talk and exhibit are both free and open to the public. For more information on the Cole Porter weekend events, October 17–19, see the Yale Arts Calendar.