The Yale Russian Chorus formed in 1953, in the midst of the Cold War. Denis Mickiewicz, a Latvian student at the Yale School of Music (now professor emeritus at Duke University), was invited by George Litton, president of the Yale Russian Club, to give a presentation on Russian choral music. Mickiewicz arrived with sheet music, a guitar, and two bottles of vodka, and said, “It’s better to sing than talk.” Soon thereafter, the YRC was born.

Over its five decades, the chorus has made over 16 U.S.S.R. tours and released 14 recordings. They have performed all over the world for government leaders ranging from France’s Charles de Gaulle, Russia’s Mikhail Gorbachev and Boris Yeltsin, and U.S. President’s Reagan, Bush, and Clinton.

Dean Robert Blocker of the Yale School of Music has praised their enduring spirit, noting “the YRC’s ability to weather ups and downs over half a century is due to its commitment to the best music only.”

About the Yale Russian Chorus 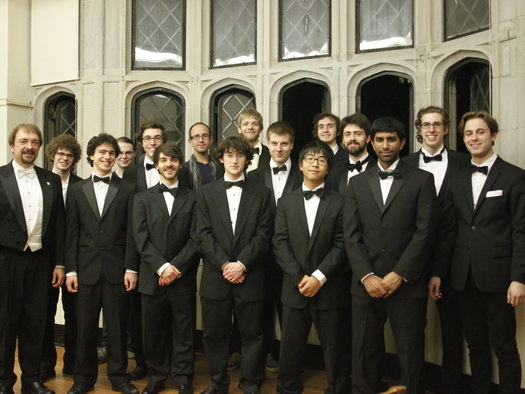 The Yale Russian Chorus is a tenor-bass a cappella choral ensemble specializing in sacred and secular Slavic choral music. Chorus members are Yale University students from a variety of academic disciplines. Founded in 1953 by Denis Mickiewicz, a Yale student at the time, the YRC is recognized as one of the world’s premier performance ensembles of Slavic music today.

The repertoire spans the twelfth century to the twenty-first, and stretches across Eastern Europe from Slovakia to Georgia, including a variety of sacred and secular settings. These include ancient chant, folk songs, and works by Tchaikovsky Bortnyansky, Kedrov, and Chesnokov, to name a few. In 1999, the YRC also performed Prokofiev’s Alexander Nevsky with the Yale Symphony Orchestra and the Yale Glee Club.

Performances in the past have been held at the White House, the Smithsonian, and the Russian Cultural Center in Washington, D.C.; Carnegie Hall, the Winter Garden, and St. Patrick’s Cathedral in Manhattan; and Holy Trinity Orthodox Cathedral in Boston. The Yale Russian Chorus has also gone on tour in Ukraine, Russia, and throughout the United States, has recorded two high profile CDs, has cultivated major events such as the Slavic Choral Festival at Yale, and has attracted the attention of the professional arts media.