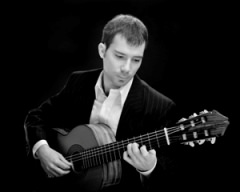 This fall, guitarist Jeremy Harting '06MM was appointed Adjunct Instructor of Guitar at both Saint Joseph’s University and Eastern University, both in Pennsylvania. These appointments join his current post as Assistant Professor of Guitar at Ithaca College in Ithaca, New York.

The move to Pennsylvania will be a return to Mr. Harting’s roots, for he began his classical guitar studies with Ernesto Tamayo at the Pennsylvania Academy of Music. In 2004, he earned his Bachelor of Music degree from Ithaca College, where he studied with Pablo Cohen. He then earned his Master of Music degree from Yale, studying under Benjamin Verdery. At Yale, Mr. Harting was awarded the George Lauder Greenway Fellowship and the Eliot Fisk Frize.

He then completed his Doctor of Music degree at Indiana University in Bloomington, under the tutelage of Ernesto Bitetti. His dissertation examines the theoretical and historical principles of the solo guitar works of Roberto Sierra.  As part of his coursework at Indiana University he studied vihuela and lute tablature with Nigel North, earning a minor in early music. Harting has played in masterclasses for John Williams, Manuel Barrueco, Sharon Isbin, David Tanenbaum, Hopkinson Smith, David Leisner, Dale Kavanagh, Frank Gerstmeier, Mark Eden, Eduardo Fernandez, Michael Newman, Laura Oltman, and William Kanengeiser.