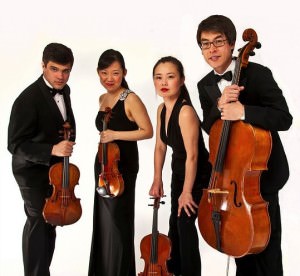 Domenic Salerni joined the Vega String Quartet, Atlanta’s professional quartet-in-residence at Emory University, as its first violinist in 2010 at age 23. The post is a full-time position with extensive responsibilities to the university during the academic year as an artist affiliate. There are significant performances with the quartet during the summer, and an expectation that its members also have an active professional life outside the quartet.

Salerni was born into a musical family in Bethlehem, Pennsylvania, 60 miles north of Philadelphia, in the state’s Lehigh Valley region. His father, Paul Salerni, is a composer and pianist; his mother, Laura Johnson, an opera and stage director; and his brother, Miles, a percussionist in Boston.

Salerni began studies at age three under the Suzuki method, followed by study at the Settlement Music School and the Juilliard School’s pre-college program. He was an honors graduate of the Cleveland Institute of Music and subsequently earned a Master of Music degree from Yale University in 2011. The award-winning violinist now performs internationally as a chamber musician, recitalist and soloist.

ArtsATL recently spoke with Salerni about his work with the quartet, his life growing up in a musical family, his broader engagement in Atlanta’s music and arts scene, and his strong interest in new music and composers.

ArtsATL: Tell us about your violin and how you acquired it.

Domenic Salerni: It’s a modern Italian instrument, made for me in 2002 by Fabio Dalla Costa in Breganze, in the province of Vicenza. The only reason I got to meet this guy is my whole family lived there for a year in 1999. My father was doing a program abroad with another professor from Lehigh University, where he teaches. So he just took us all over there and we went to school there. It was one of the most defining times of my life.

We got to meet Dalla Costa, and it turned out that he is a wonderful violin maker. So we commissioned a violin from him and I’m very happy with it. It was supposed to be ready in 2001, but he actually scrapped what he was making, as he wanted, as he said, to “make a masterpiece.” So we waited the extra year. It was well worth it. We visited Italy again in 2002 for two weeks and picked it up then.

ArtsATL: How did you get started playing? What’s your first memory of wanting to be a violinist?

Salerni: I don’t remember too much — little flashes. I do remember that soon after I started playing, my parents started telling this story about how they fell in love with this violin teacher in town and her husband, Linda and Domenick Fiore. Apparently they asked me when I was three-and-a-half, “Hey, do you want to play the violin?” And of course, not knowing any better, I said, “Sure!”

I don’t remember saying that, but I do remember I started in the Suzuki method. The mat or rug with the feet outlines stands out in my memory, because I hated standing on that. It’s there to promote good posture and discipline, but a three-year-old wants to go crazy and move around all the time. I was particularly uncomfortable. But you know, I have very fond memories of the experience, group classes and [other] things.

ArtsATL: When was your first public professional appearance?

Salerni: Oh, I know that for sure! I was five and I was playing Italian songs at the Vineyard, a local restaurant in Fountain Hill. I made eight dollars. So that was my first professional engagement.

ArtsATL: I understand there was a transitional period between Yale and the Vega Quartet.

Salerni: There was an overlap of about a year. I took the audition in the summer of 2010. My final year at Yale was 2010-11, and I was commuting back and forth. It was a kind of trial year, so they would have me down here for a performance, a performance and teaching, or a performance and master class.

ArtsATL: So now the Vega String Quartet is your primary gig. What has been the group’s impact on your career?

Salerni: The Vega Quartet has been a game changer for me, just getting plugged into the chamber music world in a much more immediate and frequent way than I had ever been previously.

The first thing is the experience of being in a professional quartet and all the demands that requires. That includes the need to learn all of their repertoire in a very quick amount of time. Opening up interesting collaborations, getting to work with people whom I’d only seen “in lights,” is fantastic — we were fortunate to play the Brahms piano quintet with Robert Spano. I get to play in festivals that I hadn’t played at before, to get that sort of performative experience. We’ve also commissioned new works; that’s been fun for me.

What it has made me realize is how different the real world is from the conservatory. The amount of work that I thought I was doing in the conservatory that was a fair amount, in a very broad way, [became] focused doing quartet far more frequently than ever previously. Having the one thing in the forefront was a big change, and a wonderful change.

ArtsATL: What about some of the musical work you have done in Atlanta outside of Vega?

Salerni: When I first got here, most of my energies, if not 150 percent of my energies, were spent learning a lot of repertoire, trying to establish a teaching studio and getting to know the musicians in town. But mostly, spending my time with Vega.

Since I’ve been here, I’ve been asked to do various things, other chamber groups in town for one concert here or there. One of the first non-Vega gigs I did was Tom Sherwood’s “Sonic Palooza” marathon, which he did through Sonic Generator in 2011. That was a lot of fun, and it was great for me to perform this 20th- and 21st-century music. That in particular was an incredible event, I thought. There are some other things. Stuart Gerber is doing great things at Georgia State with his group Bent Frequency.

ArtsATL: How did growing up with a father as a composer influence your attitudes, as a performer, toward new music as well as the canon of classical repertoire?

Salerni: I grew up in the household with his tastes, which were much more Mahlerian and less Wagnerian. From that you already have a bit of a stylistic sense of direction. On top of that, jazz, funk, Motown, the music of the ‘60s and ‘70s, the Beatles, Miles Davis, you name it. So all of that, and Stravinsky, kind of overarching everything. That was sort of a soup I grew up in, as far as style, and I think you’ll find it in his music.

It was very important for him that music not be ghettoized. The idea that “Oh, there’s the canon, and oh, there is new music,” to him, and to me as well, is a bit of a shame. It would be much better to see things as a continuum and as a spectrum. If people were programming more in that vein, it might attract a different audience.

ArtsATL: And yet we still have some audiences that cannot seem to bridge the two.

Salerni: I think the audience has a long way to catch up. People have told the quartet, “Nothing contemporary — you know, Ravel.” If Ravel is “contemporary,” then somewhere there’s a huge gap, and if Bartok still sounds “strange” to our ears, I think there’s something wrong. That’s just me. Right there you see a very different approach.

To give you an idea: I was basically hanging out with composers when I was at Yale, not string players. The conversations are different. I love my compatriot players, but [if] you hang out with a lot of composers — and yeah, there are a lot of egos in the room, but they’re all interesting characters — to me that’s much more exciting.