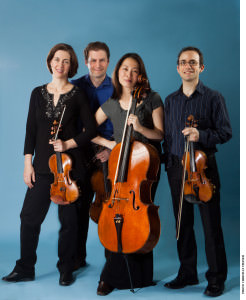 The Brentano String Quartet is switching its Ivy League affiliation from Princeton to Yale University, where it is to serve as quartet-in-residence at the School of Music starting in the 2014–15 academic year. It succeeds the Tokyo String Quartet, which is retiring after a 37-year affiliation with the School.

Formed in 1992, the group is something of a star among its kind, winning the Cleveland Quartet Award and the Naumburg Chamber Music Award, among other accolades, early in its career. In residence at Princeton for 15 years, it performs on the soundtrack of the recent film A Late Quartet, and this year was the "collaborative ensemble" at the Van Cliburn International Piano Competition.