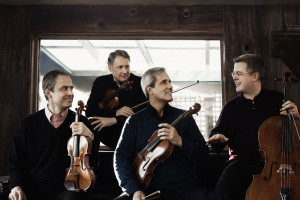 The concert traverses music from the Classical period to the twentieth century. The Emersons will open with Haydn’s Quartet in G minor, Op. 20, No. 3. Next will follow Britten’s Quartet No. 2 in C major, Op. 36, written in 1945 after the composer had traveled to Germany to play concerts for concentration camp survivors.

The concert will conclude with Beethoven’s Quartet in C major, Op. 59, No. 3, one of three quartets commissioned by prince Andrey Razumovsky and published in 1808. Click HERE for audio of the Emerson String Quartet.

This concert is part of the Oneppo Chamber Music Series, under the artistic direction of David Shifrin, at the Yale School of Music. Morse Recital Hall is located in Sprague Hall at 470 College Street (corner of Wall Street), New Haven.

Tickets start at $25, $15 with student ID. For more information or to purchase tickets, visit this page or call the Yale School of Music concert office at 203 432-4158.

About The Emerson String Quartet

The Emerson String Quartet stands apart in the history of string quartets with an unparalleled list of achievements over three decades: more than thirty acclaimed recordings, nine Grammys (including two for Best Classical Album), three Gramophone Awards, the Avery Fisher Prize, Musical America’s "Ensemble of the Year", and collaborations with many of the greatest artists of our time.

Cellist Paul Watkins, a distinguished soloist, award-winning conductor, and dedicated chamber musician, has joined the ensemble for its 37th season, and his dedication and enthusiasm have already infused the Emerson Quartet with a rich tone and vibrant sense of humor. “One of the characteristics of the Emerson Quartet is that its players… all have the ability and the instruments to produce a sweet and glossy sound — but do so sparingly. Instead, they establish a chromatic scale of timbres that range from dry and tart over clean and zesty all the way to lustrous and singing” (New York Times).

The Quartet’s season began in Montreal followed by performances in Tianjin and Taiwan. Summer festival performances included Caramoor, Aspen, Ravinia, Tanglewood, Mostly Mozart and a residency at the Norfolk Music Festival. Late summer dates at European festivals brought them to Berlin, Augsburg, Ascona, Città di Castello and [Humlebaek,] Denmark, for two appearances at the Louisiana Museum of Modern Art. In a season of over 80 quartet performances, mingled with the Quartet members’ individual commitments, Emerson highlights feature numerous concerts on both coasts and throughout North America. Multiple tours of Europe include dates in Italy, Germany, the Netherlands, Spain, France, Poland and the UK. The Emerson continues its series at the Smithsonian Institution in Washington, D.C. for its 34th season and gives a three-concert series in Lincoln Center’s Alice Tully Hall.

Formed in 1976 and based in New York City, the Quartet took its name from the American poet and philosopher Ralph Waldo Emerson.