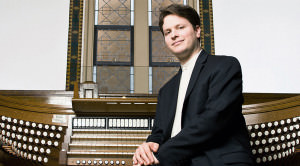 The Oregon Bach Festival has announced the appointment of organist Paul Jacobs '02MM, '03AD to lead its newly-created Organ Institute in the 2014 season.

The organ figured prominently in the compositions and performance life of J.S. Bach, and the announcement noted that the Oregon Bach Festival is arguably the first major festival to add a component devoted exclusively to organ study and performance.

The inaugural Organ Institute will take place June 30–July 5, 2014, within the Oregon Bach Festival's schedule of June 25–July 13, 2014. Through the Institute, organists will have the opportunity to immerse themselves in the art of organ playing, exploring technique and interpretation through specialized seminars.

In preparation for a final public recital, participants will perform in daily master classes under the direction of Mr. Jacobs, Matthew Halls (the artistic director of the Oregon Bach Festival), and others. The Institute will be open to both performing participants by recorded audition and to non-performing auditors.

Jacobs was quoted as saying, "One could scarcely overestimate the significance of this new Institute, one which will further assist in exposing the joy of the organ to all lovers of music."

Described by the Chicago Tribune as "one of the most supremely gifted organists of his generation," Grammy award-winning organist Paul Jacobs unites technical skills of the first order with probing emotional artistry. His performances of new works and core recital and symphonic repertoire have transfixed audiences, colleagues and critics alike.

In the 2013/14 season, Paul Jacobs returns to the Chicago Symphony Orchestra with conductor Charles Dutoit. He plays solo recitals in Washington, D.C. presented by the National Symphony on the Kennedy Center Concert Hall's new organ, as well as in Davies Hall presented by the San Francisco Symphony and Disney Hall presented by the Los Angeles Philharmonic. He returns to Spivey Hall in Atlanta, and in New York's Zankel Hall he is featured in Carnegie Hall's series of concerts, Collected Stories, performing in Arvo Part's Passio.

Paul Jacobs played the first concert on the newly restored Kuhn organ at Alice Tully Hall in New York. A frequent guest of the San Francisco Symphony, he has performed, toured, and recorded with them and Michael Tilson-Thomas. He has been guest soloist with the Philadelphia Orchestra, California's Pacific Symphony, the Kansas City Symphony, Miami's New World Symphony, the Phoenix Symphony, the Cincinnati Symphony with James Conlon, and previously with the Chicago Symphony and Pierre Boulez in Janacek's Glagolitic Mass. Internationally, he appeared at the Lucerne Festival with the San Francisco Symphony and in London at Westminster Cathedral's Grand Organ Festival.

His recording of the Messiaen Livre du Saint Sacrement, released by Naxos in 2010, was awarded that year's Best Solo Instrumental Grammy of the Year, the first time a disc of solo organ music received this honor.

Jacobs made musical history at the age of 23 when he played J.S. Bach's complete organ works in an 18-hour marathon performance on the 250th anniversary of the composer's death. He has also performed the complete organ works of Olivier Messiaen in marathon performances throughout North America, and recently reached the milestone of having performed in each of the fifty United States.

At age 15, Jacobs was appointed head organist of a parish of 3,500 in his hometown of Washington, Pennsylvania. He studied at the Curtis Institute of Music, double-majoring with John Weaver for the organ and Lionel Party for the harpsichord, and at Yale University with Thomas Murray.

Paul Jacobs joined the faculty of The Juilliard School in 2003, and was named chairman of the organ department in 2004, one of the youngest faculty appointees in the school's history. He received Juilliard's prestigious William Schuman Scholar's Chair in 2007. His own students have won prominent national and international competitions and are forging their own careers as performers and teachers at prestigious venues and academic institutions in the United States and abroad.

In addition to his concert appearances and teaching, Jacobs has appeared on American Public Media's Pipedreams, Performance Today, and Saint Paul Sunday, as well as NPR's Morning Edition and ABC-TV's World News Tonight. In August 2011 he presented a recital for NPR's Tiny Desk Concerts which remains available for viewing.