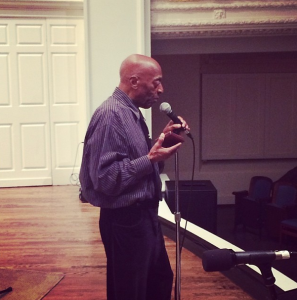 Legendary jazz drummer Roy Haynes was awarded the Ellington Medal last Friday, November 8. Willie Ruff, the director of the Ellington Fellowship at Yale, conferred the medal at a concert featuring Haynes and his Fountain of Youth Band.

Ruff said, “It was thrilling to present to him the same Ellington medal that forty years ago was given to Sonny Greer, Papa Jo Jones, Kenney Clarke, and Max Roach: all his heroes and mine.” 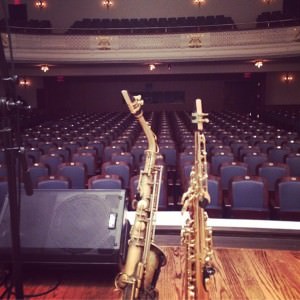 The concert, which took place in Morse Recital Hall, was the second event of the 2013-14 season of the Ellington Jazz Series at Yale. Ruff added, "The Haynes concert was great for the audience, Roy, and me." Haynes performed with his Fountain of Youth Band: Jaleel Shaw, saxophone; Martin Bejerano, piano; and David Wong, bass.

Born in 1925 in Boston, Massachusetts, Haynes grew up loving Jo Jones, the swinging drummer of the Count Basie Orchestra. By the summer of 1945, he was performing at the Savoy with Luis Russell’s Orchestra. Winner of the 2011 Grammy Lifetime Achievement Award, Haynes has spent decades as the drummer of choice for jazz stars like Lester Young, Charlie Parker, Sarah Vaughan, Thelonious Monk, and John Coltrane.

Throughout his career, Haynes has led his own ensembles of young up-and-coming musicians such as the three in the Fountain of Youth band. Photos in the post are by Shaw, posted on Instagram.