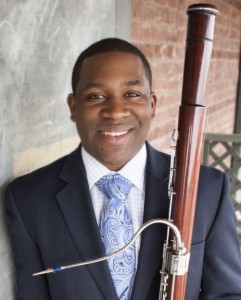 Yale alumnus Dantes Rameau '07MM was named one of Ebony Magazine's 2013 Power 100, a list of the most influential African-Americans. Rameau, cofounder and executive director of the Atlanta Music Project, was lauded as one of the "Community Crusaders" on the list.

The winners were honored in New York this week with a Power 100 Gala at Lincoln Center. Earvin "Magic" Johnson Jr., Marcus Samuelsson, and Henry Louis Gates were among those in attendance

Mr. Rameau, a bassoonist, is an alumnus of New England Conservatory's Sistema Fellow Program inaugural class, graduating in 2010. He As a Sistema Fellow he spent one year studying non-profit management and spent two months living and teaching in Venezuela.

The Atlanta Music Project has raised nearly one million dollars and grown programming to 150 students, 15 teaching artists and four locations.

Festivals he has attended include the Orford Arts Center, Banff Festival, and Aspen Music Festival. He has performed at Carnegie Hall and the Kennedy Center, as well as with the Charleston Symphony, Wallingford Symphony, and Aspen Chamber Symphony. His teaching credits include the El Sistema Nucleo Acarigua-Araure in Venezuela, YSM's Music in Schools program, and the Atlanta Music Project.

A compelling voice for social change through the arts, in 2010 Rameau was one of 25 artists from over 9000 applicants to be awarded $25,000 from AOL Artists’ 25For25 grant program. He was a member of LEAD Atlanta 2012, a leadership development program for Atlanta’s outstanding young professionals.

Rameau has lectured at the New England Conservatory, Mercer University, and the University of Manitoba. In addition, he has consulted for dozens of El Sistema-inspired programs in Canada and the United States.