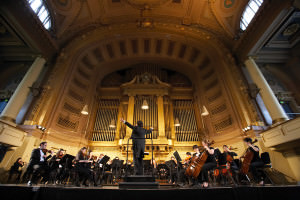 The concert features music by four composers currently studying at the Yale School of Music. On the program are Bálint Karosi's Dancescapes: three dances for orchestra, James Rubino's Shall Efface, Benjamin Wallace's Five Gifts for an Old Friend, and Brendon Randall-Myers’s Indefatigable Optimism.

About the Yale Philharmonia