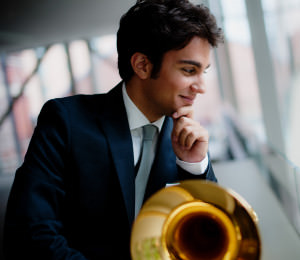 YSM alumnus Achilles Liarmakopoulos '10MM was recently appointed Adjunct Professor of Trombone at the Brooklyn College Conservatory of Music. Liarmakopoulos, an award-winning trombonist and member of the renowned Canadian Brass, has toured throughout North America, Europe, and Asia, performing and educating in diverse venues and institutions.

Achilles Liarmakopoulos completed his Master of Music degree at the Yale School of Music in 2010, studying with Scott Hartman. The YSM faculty awarded him the Philip Francis Nelson Prize for outstanding musicianship. Liarmakopoulos has also studied at the Curtis Institute of Music, San Francisco Conservatory, and the Philippos Nakas Conservatory in Athens, Greece.

Upon completion of his studies, he won the position of principal trombone of the Greek Radio Symphony Orchestra. Liarmakopoulos has also performed with the Malaysian Philharmonic, Jacksonville Symphony, and European Union Youth Orchestra, among many others.

As a recitalist, Liarmakopoulos has performed in China, Spain, France, the Netherlands, Austria, Finland, Greece, and the U.S., having been awarded honors at competitions around the globe. At the age of 18, he gave two solo performances at Walt Disney Hall in Los Angeles as the Grand Prize Winner of the Pasadena Showcase House Instrumental Competition. He has gone on to win prizes at the Christian Lindberg International Competition, the Yamaha Music Foundation of Europe (YMFE), and the International Trombone Festival’s Robert Marsteller/Conn-Selmer and Larry Wiehe solo competitions, to name a few. Liarmakopoulos was also awarded educational scholarships from the Alexandros S. Onassis Foundation and Greek State Scholarship Foundation.

In 2011, Achilles Liarmakopoulos released Tango Distinto, his debut solo album on the Naxos label, celebrating the music of Astor Piazzolla. He continues to champion the music of Latin American composers, and he was recently invited by salsa icon Rubén Blades to perform at his concerts.