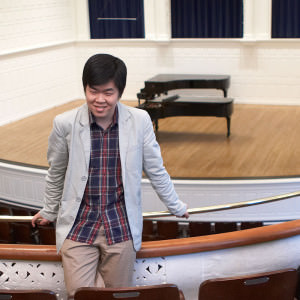 On November 26, 2013, Wenbin Jin ’09MM won second prize in the Sixth China International Piano Competition in Xiamen, China. The competition, organized by the Ministry of Culture of the People’s Republic of China, was open to pianists of all nationalities between the ages of 17 and 32.

The 26-year-old pianist has concertized in the United States, Holland, Italy, Canada, Japan, South Korea, France, Germany, Australia, and Taiwan. He has performed with the Beijing Symphony Orchestra, Shanghai Philharmonic Orchestra, and the NEC String Chamber Orchestra. He was recently appointed the official pianist of the Great Mountain Music Festival in Korea.

Wenbin Jin’s professional training includes degrees from the New England Conservatory and the Yale School of Music; his primary teachers have been Hung-Kuan Chen and Boris Berman.