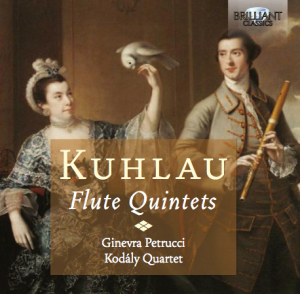 The CD was recorded December 27–29, 2012, at the Phoenix Studio in Budapest. The string players on the recording are Attila Falvay violin; János Fejérvári, viola; Mihály Várnagy, viola; and György Éder, cello.

Kuhlau, known to his contemporaries as the "Beethoven of the flute," considered Beethoven a major influence. The two met in Vienna in 1825 and improvised musical canons. Kuhlau's output for the flute comprises over 60 works — a large number for a composer who did not play the flute. He often turned to his colleague and friend Peter Bruun, a flutist and composer, for advice on his flute compositions.

The flute quintets are scored unconventionally for flute, violin, two violas, and cello, giving the sound the particular richness of three lower-register instruments. The flute essentially takes the role of first violin rather than soloist, becoming an integral part of the musical fabric and structure.