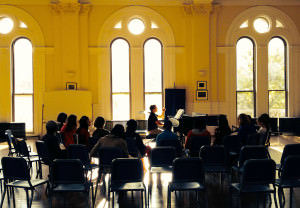 The All-City Honors Ensembles are a program of the Music in Schools Initiative, a partnership between the Yale School of Music and the New Haven Public Schools. With weekly rehearsals led by a combination of NHPS music teachers, Yale Teaching Artists, and special guests, the Ensembles provide the best young musicians in New Haven with high level ensemble experience in Band, Chorus, and Orchestra.

This year's All-City Honors Ensembles are more prolific than ever.

Before this year, the All-City Honors Ensembles all rehearsed once every Saturday throughout the spring semester, starting in the third week of January and ending with a final concert in May. This year, the program expanded to last the entire school year, starting in October. This Saturday will be the sixth and final rehearsal of their first fall semester. 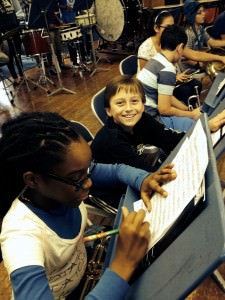 The Ensembles are also bigger than ever. With a total of 160 students between them, each ensemble — Band, Chorus, and Orchestra — has enough students, with a wide enough range of skills, to justify splitting into two groups based on skill level. Thus, there are actually six ensembles this year: Wind Ensemble and Concert Band; two Choruses; and two Orchestras. Dividing into smaller groups allows the instructors to focus more closely on students' musical development.

Each group spends half its time in full rehearsal, led by NHPS teachers and YSM faculty, and half in sectionals, taught by YSM teaching artists. With 10 directors and 14 teaching artists, there's no shortage of instructors to lead these groups — only sometimes a shortage of space. For three hours every Saturday, the Ensembles take over nearly every room in Hendrie Hall at Yale, including even the tiniest of practice rooms. There never seem to be enough music stands, but students are happy to carry their own from room to room, and share with as many stand partners as necessary.

With more students and more rehearsals, of course the Ensembles are also making more music than ever. Each Ensemble is rapidly expanding and diversifying its repertoire — the Wind Ensemble is currently rehearsing Leonard Bernstein's "Mambo" from West Side Story as well as Holst's First Suite in E-flat; the Orchestra is rehearsing both Bach's Brandenburg Concerto No. 3 and an arrangement of "Bella's Lullaby" from the movie Twilight; and the Chorus just added both Dona Nobis Pacem and the South African folk song "Motho a Wela" to its list. 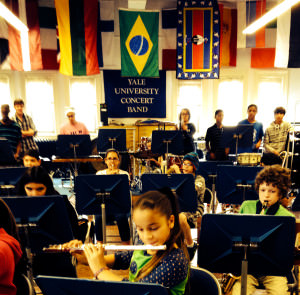 With so much music prepared already, the Ensembles are going to need more than just one concert to perform it all. Lead Teacher Rubén Rodríguez believes that concerts are the most important kind of musical events: "Concerts bring together conductors, teachers, teaching artists, schools, students, families, and communities, uniting them in a singular musical experience," he says. So in addition to the regular final concert in May, Mr. Rodríguez is currently planning a series of additional concerts that will take place in the New Haven Public Schools throughout the spring semester, as a reminder of our partnership with the school district.

The Music in Schools Initiative is proud to host such a diverse gathering of musicians. Rehearsals will resume for the spring session on January 4.