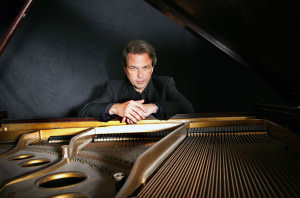 The Ellington Jazz Series at the Yale School of Music has added another concert to its 2013–14 season: the David Hazeltine Trio will perform on Thursday, January 16 at 8 pm.

Hazeltine will perform with George Mraz on the bass and alto saxophone, and Billy Drummond on drums.

David Hazeltine is one of a handful of young pianists who has successfully forged his own distinctive style out of the accumulated weight of a modern piano tradition. His influences extend from Art Tatum and Bud Powell to such masters as Buddy Montgomery, Barry Harris, and Cedar Walton. Walton, a jazz piano legend and NEA Jazz Master, called Hazeltine "the brightest star on the jazz piano horizon style” and noted that “his style has a deep-seated commitment to jazz history while communicating a wealth of 'today's' ideas.”

The concert takes place in Morse Recital Hall, located in Sprague Hall (470 College Street, New Haven). Willie Ruff is the artistic director of the Ellington Jazz Series. Tickets to the concert start at $20, $10 with student ID.

David Hazeltine made his professional debut at age thirteen in Milwaukee, and later worked extensively in and around Chicago and Minneapolis. In Milwaukee, David served as house pianist at the famed Milwaukee Jazz Gallery, working with such greats as Charles McPherson, Eddie Harris, Sonny Stitt, Pepper Adams, and Chet Baker (who encouraged David to make his mark in New York City).

Since moving to New York City in 1992, David has made a name for himself as a "musician's musician." In addition to his working trio (with drum legend Louis Hayes and bassist Peter Washington), David is in constant demand as a sideman. Recent credits include work with Freddie Hubbard, James Moody, the Faddis-Hampton-Heath Sextet, the Carnegie Hall Jazz Band, the Louis Hayes Quintet, and Marlena Shaw, for whom he serves as pianist, arranger, and musical director. Recently David was spotlighted on Marian McPartland's "Piano Jazz" radio program. David is also a member of the band One For All, which features rising tenor star Eric Alexander.

David’s debut CD as a leader, Four Flights Up (released in 1996 on the Sharp Nine label), received high praise from critics and musicians alike. Since then, he has recorded seven more CDs for Sharp Nine, the latest being The Inspiration Suite. Hazeltine has also recorded six cds for the Criss Cross label, the most recent Blues Quarters, Volume 2.  In Japan, David’s six piano trio releases for the Venus label have won him a large and growing following.

In Milwaukee, Hazeltine was co-founder and director of The Jazz School, and Department Chairman at the Wisconsin Conservatory of Music.  Recently, he served as Associate Professor at Berklee College Of Music. He is currently on the piano faculty at SUNY Purchase.