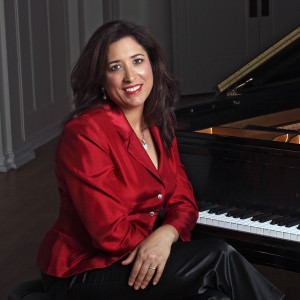 Pianist Susan Merdinger '85 MM was invited to join the International Roster of Steinway Artists in December 2012. In May 2013, Merdinger performed an All-Schubert program for the second time on the Chicago Symphony Orchestra Chamber Music Series at the Art Institute, this year as part of the RIVERS Festival. In June 2013, Ms. Merdinger made her Chicago debut with the Chicago Philharmonic under the direction of Sony Classical Artist, Mattia Rondelli at the Harris Theater for Music and Dance, performing two works by Gottschalk and Gershwin's Rhapsody in Blue.

Returning for her third summer to join the faculty at Summit Music Festival, Susan Merdinger performed in two Artist Faculty concerts, along with The Elaris Duo (Steven Elisha '85 MM and his wife, Larisa Elisha) as well as other members of the faculty in August 2013. Merdinger also participated in the 2nd Annual Fine Arts Music Society (FAMS) Festival of Brown County, as a Founding Artist Faculty Member.

For the fall of 2013, Ms. Merdinger was invited to perform again on the CSO Chamber Music Series at Symphony Center in Chicago, and also performed a solo recital for the 8th Annual Latino Music Festival in Chicago, performing works by three contemporary Latin-American Composers.

Newly released in 2013 are two CDs, Retrospection and Carnival. Retrospection is a historical release of recordings Merdinger made while a student at Yale in 1983 and 1984. Carnival features two major works by Robert Schumann, both of which will be reviewed in the March/April 2014 issue of Fanfare Magazine, along with a personal interview of Ms. Merdinger with Jerry Dubins.

Highlights of upcoming performances include Leroy Anderson's Piano Concerto in April 2014 and Gershwin's Rhapsody in Blue, by popular demand, with the Highland Park Strings in October 2014.