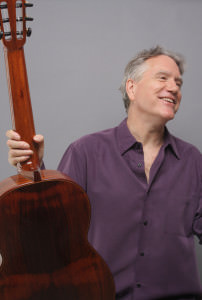 The Yale School of Music presents a recital by classical guitarist Benjamin Verdery on Saturday, January 25 at 8 pm. Verdery, hailed as "one of the classical guitar world's most foremost personalities" by Classical Guitar Magazine, will perform music from the Baroque to the present day.

The program includes selections by J.S. Bach, Robert Schumann, Felix Mendelssohn, and the 20th-century Spanish composer Manuel de Falla. Verdery will also play contemporary American selections, including two of his own compositions, Tread Lightly and Now and Ever, and pieces by two of his colleagues on the Yale faculty.

Guest artist Rie Schmidt, alto flute, will join Verdery for Ingram Marshall's The Mentioning of Love. The concert features the world premiere of Play These Notes for electric guitar, written for Verdery by Hannah Lash. The recital concludes with Verdery's own arrangement of three American songs: Prince's "Kiss," Randy Newman's "In Germany Before the War," and Otis Blackwell's "Don't be Cruel."

This event is part of the Faculty Artist Series, which features the School’s prestigious faculty in concerts that are free and open to the public. The concert takes place in Morse Recital Hall, located in Sprague Hall at 470 College Street.

Admission is free. For more information, visit music.yale.edu or contact the Yale School of Music concert office at 203 432-4158.

Benjamin Verdery enjoys an innovative and eclectic musical career. As a performer, he has given concerts around the world, with repeat appearances at the International Guitar Festival (Singapore), Festival International de Agosto (Caracas), Schubert Festival (Bad Urach, Germany), the Chamber Music Society of Lincoln Center, and the Metropolitan Opera (New York City). Verdery’s own compositions are published by Doberman-Yppan, and have been performed by such artists as John Williams, Sérgio and Odair Assad, David Russell, and the Los Angeles Guitar Quartet. He has received commissions from the New York State Council on the Arts and Pensacola College. Verdery has appeared with such diverse artists as Hermann Prey, John Williams, Paco Peña, Leo Kottke, Andy Summers, and Jessye Norman.

Verdery has released over 15 albums; his latest include Happy Here (2011), with William Coulter; First You Build A Cloud (2007), a collaboration with Andy Summers of The Police; and the solo album Branches (2007). His recording Start Now (Mushkatweek) won the 2005 Classical Recording Foundation Award. Benjamin Verdery is artistic director of 92nd Street Y’s Art of the Guitar series and an honorary board member of the Suzuki Association of the Americas. He has been teaching guitar at the Yale School of Music since 1985 and is artistic director of the Yale Guitar Extravaganza, which will next be held on February 22, 2014. Each summer Benjamin holds his Annual International Master Class on the Island of Maui (Hawaii).