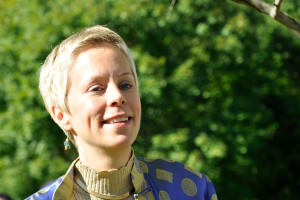 Nimbus Alliance has recently released the CD “Augusta Read Thomas: Selected Works for Orchestra.” It is the first in a series of CDs of her music to be released by the label. The second CD — of solo and chamber music — will be released in spring 2014. The third CD will feature the world premiere and first recording of the saxophone concerto Prisms of Light by soloist Frederick Hemke with the New Haven Symphony Orchestra led by William Boughton.

Thomas, an American composer who studied at YSM in the late 1980s, was the Mead Composer-in-Residence for nine years with the Chicago Symphony Orchestra. In 2007, she was a finalist for the Pulitzer Prize in Music. She currently holds the prestigious position of University Professor at the University of Chicago.

The first disc opens with the recent orchestral work Aureole (2013). It includes works as far back as 1995, with a live concert performance of Words of the Sea by the Chicago Symphony Orchestra under Pierre Boulez. Two works represent the dominance of the concerto throughout her career: the bell-like Carillon Sky (2005) for violin and chamber ensemble, and Silver Chants the Litanies (2004) for horn and 18 players, written in memory of Luciano Berio.

The music of Augusta Read Thomas, which has been described by the American Academy and Institute of Art and Letters as having “extraordinary clarity and elegance with a bold resonant vitality,” are influenced by jazz as well as a diverse range of composers including Bach, Mahler, and Berio.