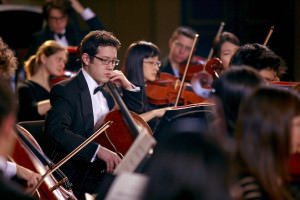 This post was updated Feb. 19 to reflect a change in time. The concert will begin at 8 pm.

The Yale School of Music presents its two conducting fellows, Jonathan Brandani and Louis Lohraseb, in a performance with the Philharmonia Orchestra of Yale on Friday, February 28, 2014. The concert takes place at 8 pm in Morse Recital Hall, an intimate venue to hear a full orchestra.

The program includes selections by Wagner, Copland, and Beethoven. Wagner’s Siegfried Idyll was composed as a birthday present to his second wife, Cosima, after the birth of their son. Copland’s jazz-infused Music for the Theatre was written not for a specific play; Copland selected the title because the “music seemed to suggest a certain theatrical atmosphere.”

A highlight of the program will be Beethoven’s Symphony No. 3 in E-flat major, known as the “Eroica” (the Italian word for “heroic”).

Both the conducting fellows study with Shinik Hahm at the Yale School of Music.

The concert is free and open to the public, and no tickets are required. Morse Recital Hall is located in Sprague Hall at 470 College Street, New Haven. For more information, call the Yale School of Music concert office at 203 432-4158 or visit music.yale.edu. 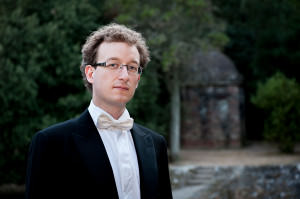 Jonathan Brandani (Lucca, Italy 1983) is currently a Conducting Fellow (MM’14) at the Yale University, where he studies with Shinik Hahm. Jonathan studied Orchestra Conducting with Mark Stringer at the Universität für Musik und darstellende Kunst in Vienna (Austria), where he obtained his Magister Artium Diploma with full grades and honours in June 2012. At the same University he has also studied Opera Conducting/Répétiteur with Konrad Leitner and Choir Conducting with Erwin Ortner; while studying in Vienna, he could also benefit from the useful advices a.o. of Daniel Harding and Zubin Mehta. He has conducted a.o. the Wiener KammerOrchester, Russian National Orchestra, Webern Symphonie Orchester, Maribor International Orchestra, Haydn Symphonietta, Royal Camerata Bucharest. From 2008 to 2010 he has worked as Répétiteur at the Opera productions of the Festival Oper Klosterneuburg (Austria). He recently conducted several Operas at the Opera House at Schönbrunn Castle in Vienna (2011-2012), at the Sommertraum Festival am Semmering 2012 (Austria) and at the LuccaOperaFestival 2013 (Italy). Jonathan also studied Piano (graduating with full marks and cum laude at the Istituto Musicale “P. Mascagni“ in Livorno, Italy), Harpsichord, Organ, Composition and Musicology. www.jonathanbrandani.com

As a conducting fellow at the Yale School of Music, Louis Lohraseb (b. 1991) currently studies under Shinik Hahm. Mr. Lohraseb took up music at an early age and later studied piano with Findlay Cockrell and Amy Stanley, composition with Robert Levin, musicology and composition with William Carragan, conducting and composition with James Walker, and conducting with Gerard Floriano. As a conductor, Mr. Lohraseb was the assistant director of the Geneseo Symphony Orchestra and music director of the Friends of Music Orchestra, which is comprised of members of the Rochester Philharmonic Orchestra. Conducting from the keyboard, Lohraseb has performed many concertos of Mozart as well as J.S. Bach’s two triple harpsichord concertos as well as Bach’s Brandenburg Concerto No. 5. Recent credits include the Mozart two-piano concerto and the Rachmaninov Second Concerto with the Geneseo Symphony Orchestra. Mr. Lohraseb has participated in a number of chamber music recitals, including concerts with members of the Rochester Philharmonic Orchestra in 2012. His compositions have been performed internationally. His recent musicological work o the sources of Anton Bruckner’s Sixth Symphony was presented at a musicological conference at the University of Oxford this past April, and will be published this fall in the Bruckner Journal. This past spring he graduated summa cum laude from SUNY Geneseo, where he was an Edgar Fellows Honors student and became a member of Phi Beta Kappa.