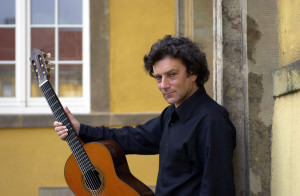 The Yale School of Music presents the renowned classical guitarist David Tanenbaum in the culminating concert of the Eight Yale Guitar Extravaganza on Saturday, February 22.

Tanenbaum is an important proponent of new guitar repertoire, and his concert at Yale will focus on contemporary pieces. The program includes Ronald Bruce Smith’s Five Pieces for Guitar and Live Electronics, Steve Reich’s Electric Counterpoint, and Mario Davidosky’s Synchronisms No. 10.

The concert is part of the 8th annual Yale Guitar Extravaganza. The performance takes place at 8 pm in Morse Recital Hall, located in Sprague Hall at 470 College Street.

Tickets are $12, $8 with student ID. Passes to the Guitar Extravaganza are also available. For more information, visit music.yale.edu/guitar-extravaganza or contact the Yale School of Music concert office at 203 432-4158. TICKETS

David Tanenbaum is recognized as one of today’s most eloquent proponents of new guitar repertoire. Composers who have written works for him include Hans Werner Henze, Terry Riley, Aaron Jay Kernis, Roberto Sierra, and Lou Harrison. He has toured extensively with Steve Reich and Musicians and has had a long association with Ensemble Modern. As a chamber musician he has collaborated with, among others, the Kronos, Shanghai, Alexander, and Chester String Quartets, dancer Tandy Beal, and guitarist Manuel Barrueco. Mr. Tanenbaum is currently Chair of the Guitar Department at the San Francisco Conservatory of Music, where he received the 1995 Outstanding Professor Award.

David Tanenbaum is one of the most admired classical guitarists of his generation.

He has performed throughout the United States, Canada, Mexico, Europe, Australia, the former Soviet Union and Asia, and in 1988 he became the first American guitarist to be invited to perform in China by the Chinese government. He has been soloist with the Los Angeles Philharmonic, San Francisco Symphony, Minnesota Orchestra, and the London Sinfonietta, among others, with such conductors as Esa-Pekka Salonen, Kent Nagano, and John Adams. Tanenbaum has been a featured soloist at many international festivals, including those of Bath, Luzern, Frankfurt, Barcelona, and Vienna as well as numerous guitar festivals.

David Tanenbaum’s three dozen recordings, which reflect his broad repertoire interests, can be found on New Albion, EMI, Nonesuch, Albany, Bridge, and many other labels. His 2002 recording as soloist with the L.A. Philharmonic in John Adam’s Naive and Sentimental Music was nominated for a Grammy as the Best New Composition. His many editions of guitar music include the David Tanenbaum Concert Series for Guitar Solo Publications. He has also written a series of three books, The Essential Studies, and his chapter on the Revival of the Classical Guitar in the 20th Century appears in the Cambridge Companion to the Guitar. He has been Artist-In-Residence at the Manhattan School of Music and is in demand for master classes worldwide. Tanenbaum studied guitar with Rolando Valdez-Blain, Aaron Shearer, and Michael Lorimer, attending the San Francisco Conservatory and Peabody Conservatory.