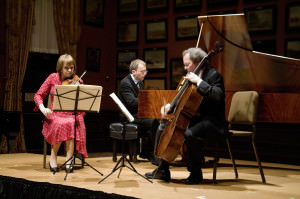 The trio of Vera Beths, violin; Kenneth Slowik, cello; and Pedja Muzijevic, fortepiano, will perform music from the early Romantic period, with selections by Beethoven, Schubert and Mendelssohn.

The Yale Collection of Musical Instruments, one of the foremost institutions of its kind, preserves and exhibits musical instruments from antiquity to the present. Many instruments are maintained in playing condition and are featured in performances and demonstrations in the fine acoustic of the upstairs gallery, the venue for this performance. The Collection is located at 15 Hillhouse Avenue, New Haven.

Dutch violinist Vera Beths studied at the Amsterdam Conservatory and in New York under Ivan Galamian. The ensemble Archibudelli, which she founded with Anner Bylsma and Jürgen Kußmaul, regularly uses instruments with gut strings in performances of 18th- and 19-century music that have been recorded on award-winning CD’s, often in collaboration with the Smithsonian Chamber Players.

Pianist Pedja Muzijevic has performed throughout the world as a soloist in recital and with major orchestras, including the Milwaukee Symphony, the Residentie Orkest in The Hague, the Dresden Philharmonic, the Shinsei Nihon Orchestra in Tokyo, and the Boston Pops. His Carnegie Hall debut in Mozart’s Concerto K. 503 with the Oberlin Symphony was recorded live and has been released on the Oberlin Music label.

Cellist and conductor Kenneth Slowik is artistic director of the Chamber Music Program at the National Museum of American History. He is a founding member of the Axelrod and Smithson String Quartets, and the Castle Trio. Recently, he has devoted increasing amounts of time to conducting oratorio, opera, and the orchestral repertoire. Many of his over fifty recordings featuring repertory by composers from Monteverdi to Arnold Schoenberg have been international prize winners. A member of the University of Maryland faculty, Kenneth Slowik is also artistic director of the Oberlin Baroque Performance Institute.