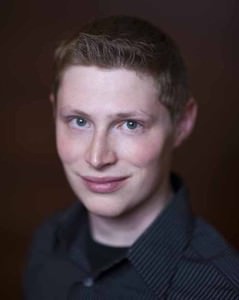 On February 2, 2014, Dominick DiOrio '12 DMA was awarded an inaugural grant from the Ann Stookey Fund for New Music. DiOrio, the assistant professor of choral conducting at the Indiana University Jacobs School of Music, will use the grant to compose a new work for NOTUS: Contemporary Vocal Ensemble.

Ann Stookey was a devoted choral singer and advocated for new music before her death in 2012. The fund, established in her name, supports the commissioning, performing, and recording of new musical works, with a particular focus on choral music. In its first year, the fund awarded grants totaling $36,400 to underwrite the commissioning of new music by five choral organizations.

DiOrio plans his new work to be a 20-minute setting of Amy Lowell’s poem “Stravinsky’s Three Pieces ‘Grotesques’ for String Quartet,” and will be scored for 24 singers accompanied by a string quartet, organ, and percussion. The piece will be performed by NOTUS in the spring of 2015, along with P.Q. Phan’s “A Vietnam Requiem.”

In addition to DiOrio’s piece, the spring will see NOTUS premiere new works by Indiana University faculty composer Aaron Travers, guest Zachary Wadsworth, and student composer Patricia Wallinga. It is DiOrio’s mission to commission a new work from every member of the Jacobs School composition faculty within the next few years.

Called "a forward-thinking young composer filled with new ideas, ready to tackle anything," composer and conductor Dominick DiOrio was named Best Composer 2011 by HoustonPress for Klytemnestra, his chamber opera with Divergence Vocal Theater and librettist Misha Penton. His second opera, The Little Blue One with librettist Meghan Guidry, will have its premiere in April 2014 in Boston with Juventas New Music Ensemble and musical director Lidiya Yankovskaya.

DiOrio fills frequent commissions for organizations and institutions across the country including eighth blackbird, University of Richmond, Third Coast Percussion, and the Princeton Glee Club. His music has been heard in venues as diverse as the Museum of Modern Art (NYC), the Museum of Fine Arts (Houston), the Oriental Arts Center (Shanghai), the Rothko Chapel, the Meyerson Symphony Center (Dallas) and the Kimmel Center for the Performing Arts (Philadelphia).

At Yale, DiOrio earned the Doctor of Musical Arts degree in conducting and studied with Marguerite Brooks, Simon Carrington, and Jeffrey Douma. His DMA research on Krzysztof Penderecki's St. Luke Passion is published in The Choral Scholar. He also earned the MMA and MM degrees in conducting from Yale and the BM in composition summa cum laude from Ithaca College, where he studied with Gregory Woodward, Dana Wilson, and Janet Galván. He currently serves as Treasurer on the Executive Board for the National Collegiate Choral Organization (NCCO) as well as on the advisory boards for the Princeton Pro Musica and the Young New Yorker's Chorus (YNYC).