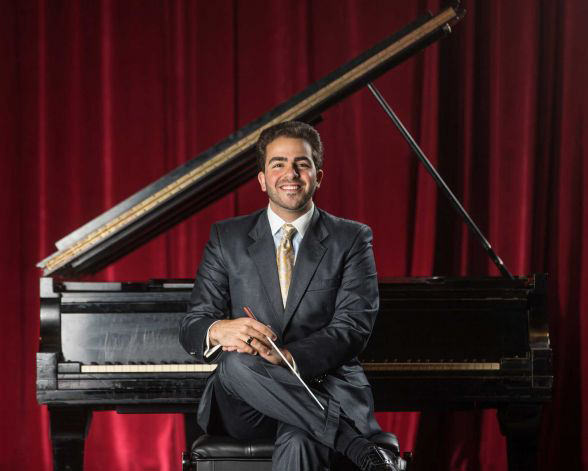 Louis Lohraseb '15 MM, a student in orchestral conducting, was invited to participate in the 2014 Castleton Festival’s Maestro Maazel Masterclasses. He will study with Maestro Lorin Maazel, the Music Director of the Munich Philharmonic and the Executive and Artistic Director of the Castleton Festival. From May 29th to 31st, Lohraseb will work with the conductors alone before and the singers and orchestra members arrive.

The conducting master classes from June 9th to July 20th will include sessions on “How to Conduct an Opera,” “How to Conduct a 20th Century Masterpiece,” and “The Art of Interpretation,” among others. The Castleton festival, in the Piedmont hills of Virginia, nurtures young artists in opera and classical music performance.

Gramaphone magazine said of the festival in 2010, “Not only does the Maestro bring out the best in these young musicians, they bring out the best in him. And ultimately, that’s what makes the Castleton so special; young artist-fueled summer programs abound, but where else can they learn from the undisputed best?”

As a conducting fellow at the Yale School of Music, Louis Lohraseb (b. 1991) currently studies under Shinik Hahm. Mr. Lohraseb took up music at an early age and later studied piano with Findlay Cockrell and Amy Stanley, composition with Robert Levin, musicology and composition with William Carragan, conducting and composition with James Walker, and conducting with Gerard Floriano. As a conductor, Mr. Lohraseb was the assistant director of the Geneseo Symphony Orchestra and music director of the Friends of Music Orchestra, which is comprised of members of the Rochester Philharmonic Orchestra. Conducting from the keyboard, Lohraseb has performed many concertos of Mozart as well as J.S. Bach’s two triple harpsichord concertos as well as Bach’s Brandenburg Concerto No. 5. Recent credits include the Mozart two-piano concerto and the Rachmaninov Second Concerto with the Geneseo Symphony Orchestra. Mr. Lohraseb has participated in a number of chamber music recitals, including concerts with members of the Rochester Philharmonic Orchestra in 2012. His compositions have been performed internationally. His recent musicological work o the sources of Anton Bruckner’s Sixth Symphony was presented at a musicological conference at the University of Oxford this past April, and will be published this fall in the Bruckner Journal. This past spring he graduated summa cum laude from SUNY Geneseo, where he was an Edgar Fellows Honors student and became a member of Phi Beta Kappa.