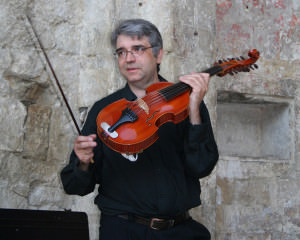 Pierre Henri Xuereb will give a viola master class at the Yale School of Music on Monday, March 24. The class will take place at 4 pm in Leigh Hall, Room 402.

The class will feature four YSM violists, all students of Ettore Causa, working with Xuereb on selections from their repertoire.

The class is open to public; admission is free. Leigh Hall is located at 435 College Street, New Haven.

Pierre Henri Xuereb took a first prize at the Paris Conservatoire National Supérieur at the age of sixteen, completing his training in the United States, at first at the New York Juilliard School and then at the University of Boston. He was one of the last pupils of William Primrose. After auditioning in New York, he was invited by Pierre Boulez to join the Ensemble Intercontemporain, with which he spent two years. He now enjoys an international career as a soloist and chamber-music player, and teaches the viola at the Paris Conservatoire National Supérieur.