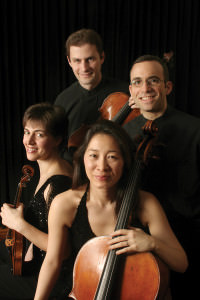 The Yale School of Music presents the Brentano String Quartet in a concert on Tuesday, April 8. This is the ensemble's first Yale appearance since the announcement that they will succeed the Tokyo Quartet as Yale’s Artists in Residence, beginning with the 2014–15 academic year. The program, which features music from Haydn to Bernstein, will take place at 8 pm in Morse Recital Hall.

Since its inception in 1992, the Brentano Quartet has appeared throughout the world to popular and critical acclaim; The New York Times extols its “luxuriously warm sound (and) yearning lyricism,” while the London Independent lauds the group as “passionate, uninhibited and spellbinding.” The quartet's members are Mark Steinberg, first violin; Serena Canin, second violin; Misha Amory, viola; and Nina Lee, cello.

Their April 8 concert will begin with quartets by Haydn and Mendelssohn.  Haydn's String Quartet in B-flat major, Op. 64, No. 3, combines the sparkling wit and charm of Haydn's courtly compositions with the exuberant brilliance of his later pieces. Mendelssohn’s gregariousness shines through in his graceful String Quartet in D major, Op. 44, No. 1.

The second half of the program features a collection of short works by composers including Antonin Dvorák, Leonard Bernstein, Charles Ives, and Elliot Carter. “There was a time, not so long ago," the quartet writes in their program notes, “when one might go to hear a violin recital and the program would consist of a couple of sonatas followed by a cornucopia of short works, varying in character. On this program we are hoping to recapture that spirit.”

This concert is part of the Oneppo Chamber Music Series, directed by David Shifrin, at the Yale School of Music. Morse Recital Hall is located in Sprague Hall at 470 College Street (corner of Wall Street), New Haven.

Tickets start at $25, $15 with student ID. For more information or to purchase tickets, visit music.yale.edu or call the Yale School of Music concert office at 203 432-4158.

About the Brentano String Quartet

Beginning in July, 2014, the Brentano Quartet will succeed the Tokyo Quartet as Artists in Residence at Yale University, departing from their 14-year residency at Princeton University. The quartet also currently serves as the collaborative ensemble for the Van Cliburn International Piano Competition. In recent seasons, the Quartet has traveled widely, appearing all over the United States and Canada, in Europe, Japan, and Australia. It has performed in the world's most prestigious venues and has participated in summer festivals such as Aspen, Caramoor, Music Academy of the West, Edinburgh Festival, and the Kuhmo Festival (Finland). In 2012, the Brentano String Quartet provided the central music (Beethoven Opus 131) for the critically-acclaimed independent film A Late Quartet.

In addition to performing the entire two-century range of the standard quartet repertoire, the Brentano Quartet has a strong interest in both very old and very new music.  It has performed many musical works pre-dating the string quartet as a medium, among them Madrigals of Gesualdo, Fantasias of Purcell, and secular vocal works of Josquin. Also, the quartet has worked closely with some of the most important composers of our time, among them Elliott Carter, Charles Wuorinen, Chou Wen-chung, Steven Mackey, Bruce Adolphe, and György Kurtág. The ensemble has commissioned works from Wuorinen, Adolphe, Mackey, David Horne, and Gabriela Frank.

The Brentano Quartet has been privileged to collaborate with such artists as soprano Jessye Norman, pianist Richard Goode, and pianist Mitsuko Uchida. In spring, 2013, the second of three recordings featuring the late Beethoven Quartets was released on Aeon Records. Previous recordings include a disc of Mozart (also on Aeon), and the Opus 71 quartets of Haydn. The Quartet has released a disc of the music of Steven Mackey on Albany Records, and has also recorded the music of Bruce Adolphe, Chou Wen-chung, and Charles Wuorinen.

Within a few years of its formation, the Quartet garnered the first Cleveland Quartet Award and the Naumburg Chamber Music Award. In 1998, cellist Nina Lee joined the Quartet, succeeding founding member Michael Kannen.  The Quartet is named for Antonie Brentano, whom many scholars consider to be Beethoven's "Immortal Beloved," the intended recipient of his famous love confession.