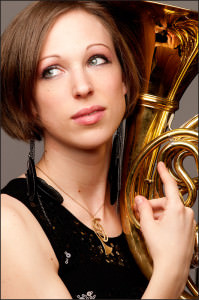 Former New Haven Symphony Orchestra hornist Leelanee Sterrett, who went on to win a spot at the New York Philharmonic as assistant principal and utility horn last year, returns to NHSO for two concerts celebrating the summit of German romanticism Thursday and Sunday […]

A Michigan native, Sterrett grew up in a musically enthusiastic family and attended Interlochen Arts Academy. She received her bachelor’s degree from the University of Wisconsin–Madison and a master’s degree from the Yale School of Music. She is also an alumna of The Academy, Carnegie Hall’s collective of young professionals and music advocates.

Sterrett is a former prizewinner in the International Horn Competition of America and the Yamaha Young Performing Artists Program.

The concert begins with Wagner’s “Siegfried Idyll,” a gentle song of contentment and gratitude composed for his second wife, Cosima, after the birth of their son. Sterrett then takes the stage to perform Strauss’ Horn Concerto No. 2, which moves from gentle and lyrical to fanfare gymnastics in the final movement. The evening concludes with Beethoven’s Symphony No. 6 “Pastorale,” an innovative piece that portrays nature through five descriptive movements.