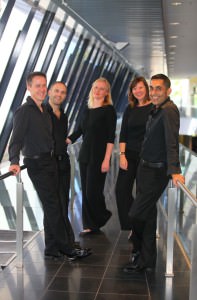 On Wednesday, April 9, 2014, the Yale Collection of Musical Instruments presents the ensemble Ironwood performing "A Different Sort of Brahms." The concert begins at 5:30 pm at the Collection.

The recital program, acclaimed around the world, questions today's assumptions about Romantic performance practice. Here, Ironwood presents the music as it would have been performed in the Romantic style of the 19th century.

"A Different Sort of Brahms" is the result of the best-selling book Off the Record: Performing Practices in Romantic Piano Playing (Oxford University Press, 2012). The research involved listening to early recordings of pianists who knew Brahms and analyzing primary source documents about 19th-century performance styles. The program has received acclaim from New York to Australia, including at the 2012 American Brahms Society conference, and has been broadcast internationally.

Ironwood is an Australian quintet led by Neal Peres Da Costa on historic pianoforte. The ensemble's string players are violinist Robin Wilson and Rachael Beesley, violist Nicole Forsyth, and cellist Daniel Yeadon. Established in 2005, the ensemble will release this work as a much-awaited new recording by ABC Classics (Australia) in late 2014.

The concert begins at 5:30 pm at the Collection of Musical Instruments, located at 15 Hillhouse Avenue, New Haven. Tickets are $20, $15 for seniors, and $10 for students. For more information, call the Yale School of Music concert office at 203 432-4158 or visit music.yale.edu.

The ensemble came together in late 2006, presenting a festival of Mozart’s chamber works for strings and piano at the Sydney Conservatorium of Music, and since then has presented concerts in conjunction with Historic Houses Trust, NSW at Vaucluse and Elizabeth Bay Houses, exploring the music of mid-19th century Sydney and Europe as well as performances at Sydney's Sydney Harbour Trust historic North Head Artillery School Ballroom and St.John's in Sorrento, Victoria.

Ironwood have an active commissioning program for music on early instruments, including commissioning new works for gut strings by Australian composers including Rosalind Page, Kevin March and Paul Stanhope. The group has performed widely, including a national tour for Musica Viva Australia, performances for the Peninsula Music Festival and the Sydney Biennale.

Ironwood runs a successful early music educational program with workshops in Victoria and NSW, and for various organizations including MLC School, Sydney, Adelaide Chamber Players, and Wollongong Conservatorium. In October 2007 Ironwood were one of the first music ensembles as Artist-In-Residence at the Arthur Boyd property, Bundanon, on NSW’s south coast and in 2009 and 2010 they have continued this honour.

Members of Ironwood also record and broadcast for many organizations including the ABC, Sony, Channel Classics, Tall Poppies, and radio networks across Europe, including WDR radio (Germany), Naxos and Teldac. Recently Ironwood has been involved in several recordings for ABC Classics as well as broadcasts for ABC Classic FM.